Although many paranormal investigation groups swear that they’ve captured spirits via thermal camera, PIM uses the FLIR TG165 Thermal Imaging Camera primarily to rule out wildlife in a location that could contaminate our evidence. 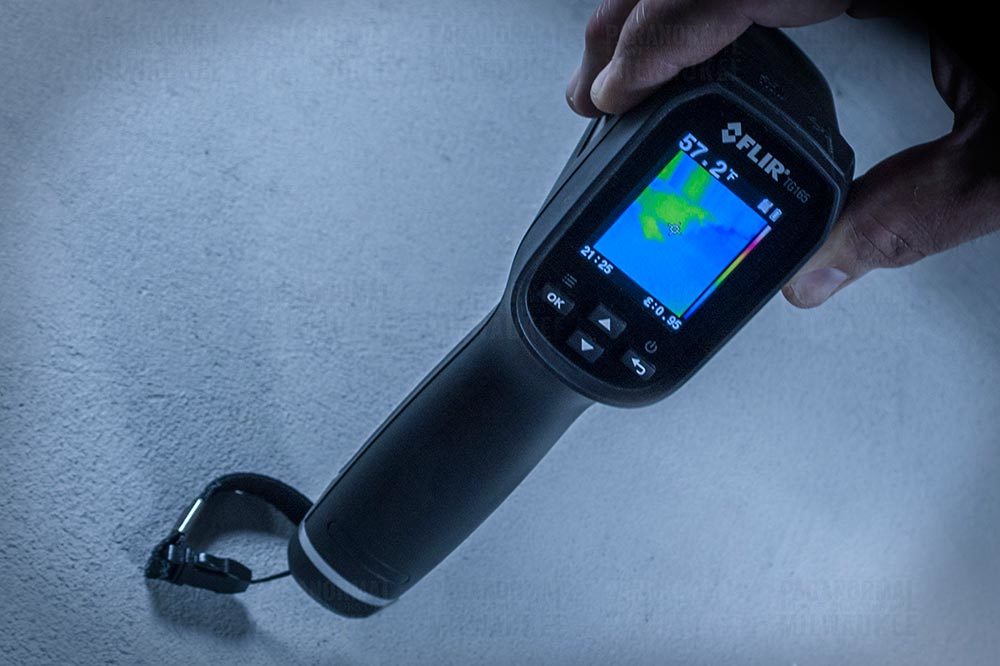 In PIM, a thermal imaging camera is most useful in determining animal infestations when investigating in the dark, or at a safe distance.  Often paranormal claims can be explained when an animal infestation is uncovered.  However, there are a lot of video clips and still images taken using a thermal imaging camera that seem to show something anomalous.  So what could those be?

Another major thing one needs to remember when using a thermal imaging camera is the scale. Most cameras will have a dynamic scale, which means the temperature and corresponding cold to hot (blue to red or dark grey to white depending on the camera setting) scale will change depending on the range of temperatures that the camera is detecting. As an example, if you were to point the camera at a living person, the blueish tones would be cooler (less than 60F) and the redder tones would be warmer (around 98F). Now, if you moved the camera away from a living person and pointed it at an empty room you would still see all the colors (blue, green, yellow, orange, red) however, the scale on the camera will change to something that ranged from 60F-100F to something that ranges from 50F-60F (depending on the time of year, indoors versus outdoors, climate controlled versus not, etc). Since the range of temperatures is very different from one scenario to the other, you need to take that into account when using the camera.  If scale is not considered, undue excitement may be had over a “warm” spot in an empty room or a “cold spot” located near someone living.

The last major point to consider when using a thermal imaging camera is residual heat.  The same thing that happens when you use the restroom right after someone else and you have a nicely warmed toilet seat occurs whenever a warm living creature comes in contact with an inanimate object and care must be taken to not mistakenly “capture” this heat transfer as something paranormal.  If someone is standing, sitting, or leaning on something and then gets up and leaves, the residual heat left by that person’s (or animals) body can be picked up by a thermal imaging camera.  This can cause someone to believe there is a heat signature where there is not a living creature, but the possibility that someone or something living was there and has moved needs to be considered.  This can happen when there are animal infestations in a building and the animals vacate a location when investigators enter as well.