The group arrived on location hours prior to being able to get into the jail. They used this time to get baseline weather conditions using a Kestrel 3500 weather station and take photographs/videos of the outside of the building. The group also used their early arrival time to get dinner prior to the investigation. 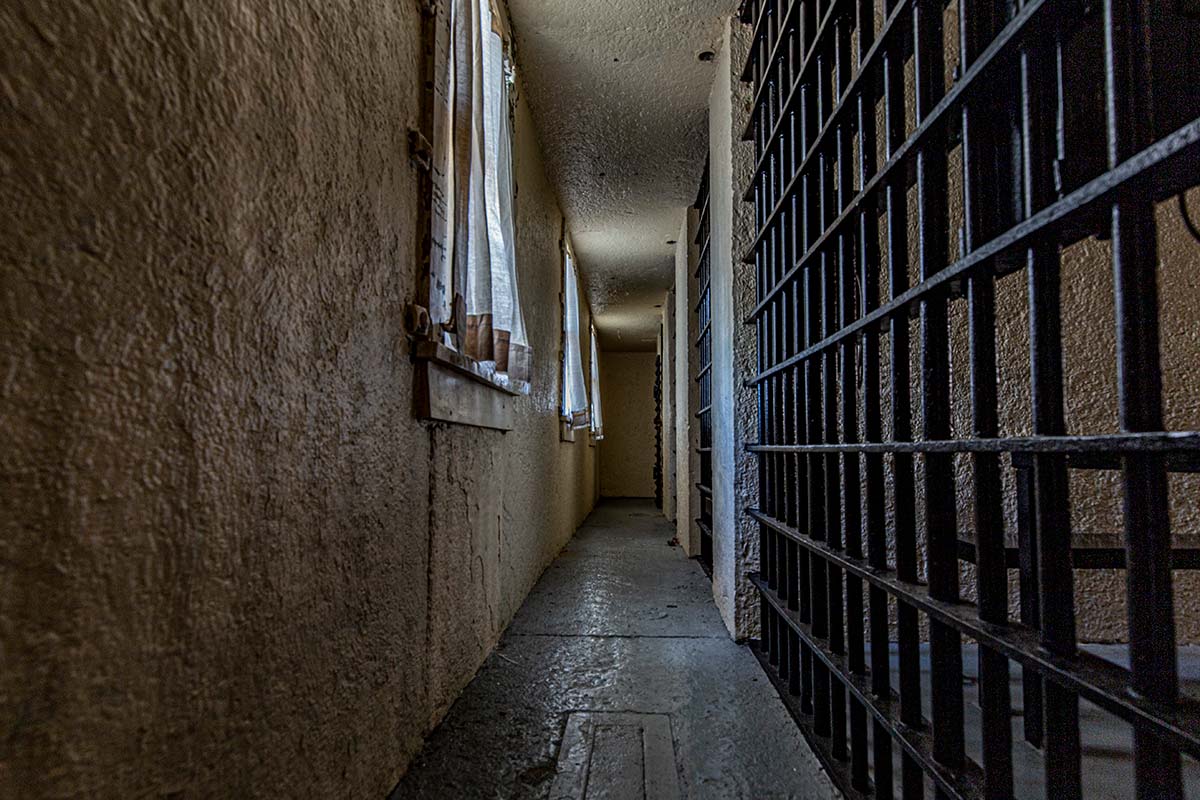 The owner, who was staying in a trailer home on the property at the time, gave Noah the keys to the night club property located in the center of town. The night club property is part of the package for booking the jail. Amber, Gravy and Noah walked over to check out that building while the rest of the team stayed behind. It was at this time, Gravy, Noah and Amber decided that investigating the secondary building would have not been worth their effort considering its location in town, the size of the building, the time needed to set up equipment, the physical investigation and several other factors. Their main focus for that evening was going to be the jail.

The group entered the jail through the side door by the In-take office and set up basecamp in the Kitchen. Once the waivers were signed, Dann showed the group around with a quick tour. After the tour, the group began to set up their equipment while Brandon took interior photos of the location. At approximately 7:04 pm, all PIM members started their control recorders and their Extech dataloggers.

Every member of PIM is equipped with a Zoom H1 audio recorder, which is used as their control recorder and either the Extech RHT50 datalogger or Extech SD700 datalogger. Control recorders are not only used as another recording device but also to document the sound contamination that an investigator might create during an investigation. Control recorders are started and time stamped first before any other equipment is started and they are turned off last to ensure any anomalous noises can be cross-checked. Control recorders are also placed in a Faraday cage, if possible. A Faraday cage is a container that can block EMF frequencies. The construction of the cage will determine how many different EMF frequencies the cage will be able to block. Faraday cages work by generating an external static electrical field which causes the electric charges within the cage’s conducting material to be distributed such that they cancel the field’s effect in the cage’s interior. PIM’s cages are designed to specifically block out FM, and some AM, radio frequencies from interfering with their audio recorders, thus creating false EVPs. The Extech dataloggers take temperature, humidity, and barometric pressure readings once a minute (RHT50) or every 5 seconds (SD700), and is used to try and correlate environmental data with any personal experiences an investigator might encounter during an investigation or anomalous audio/video data captured during an investigation. 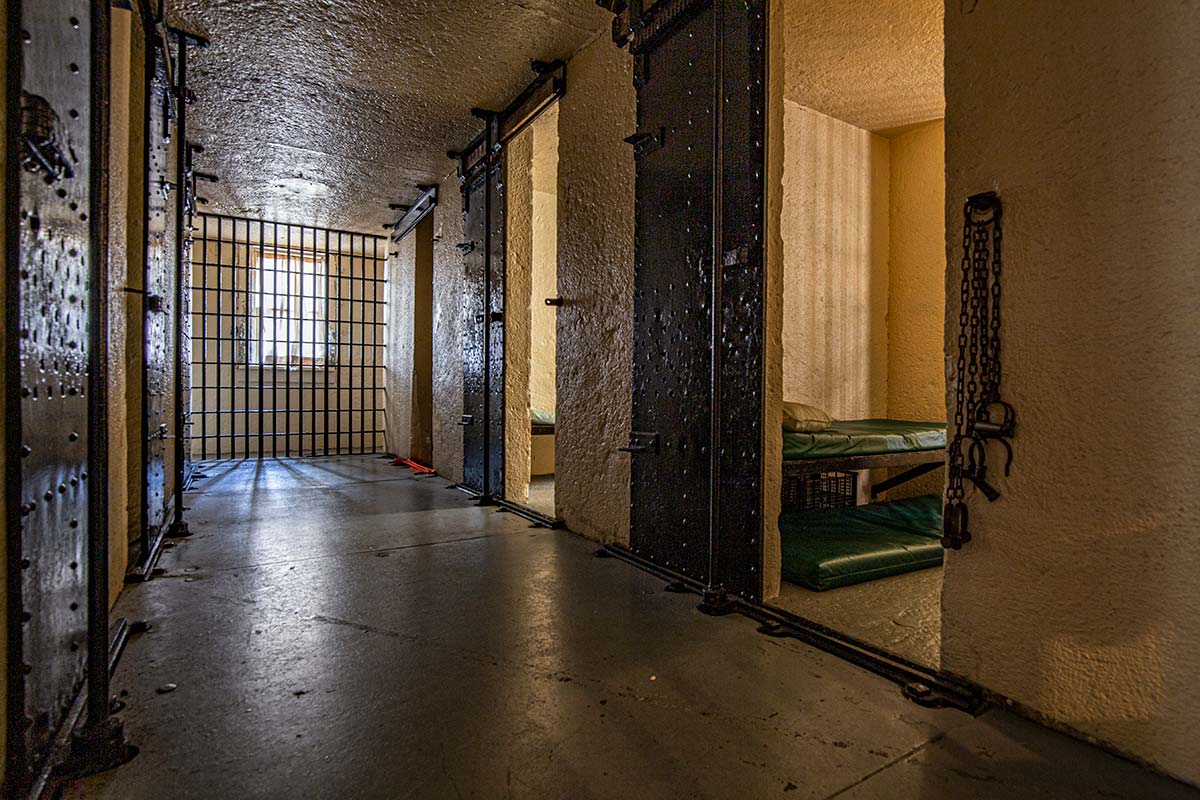 A ghost pro multi-spectrum camera was placed in the Cell Block dining table facing a trigger object bank. Trigger objects are miscellaneous items that are strategically chosen in hopes to invoke a response. The trigger objects placed on top of the table were a Crucifix, a Bible, a cigar, a pair of die (snake eyes), whiskey, 2 bullets, a deck of cards (ten of clubs face up), two cigarettes, holy water, a Playboy magazine opened to a page without nudity, a billy club, a magnetic levitator, a straight edge razor, the PIM Platter, a harmonica and two photos of police officers that had once worked at the jail or for the Hartford City police force. These items are placed on graph paper and baseline photos are taken before and after the investigation to document the starting positions of said objects. Placed alongside the trigger object bank was a touch flashlight and the DM X-930 Dark Matter detector.

The Dark Matter Detector is a device that measures EMF, temperature, barometric pressure and has a high-quality audio recorder. This device also datalogs these measurements for later review should something occur and would need to be referenced.

The PIM Platter is a plate with letters (A-Z) and numbers (0-9) around the outer rim of the plate. A metal rod on a swivel in the middle of the plate is positioned in a neutral location of the rim. The premise of the PIM Platter is to allow something to manipulate the metal rod in the direction of a letter or number in response to questions asked by investigators.

A Zoom H1 audio recorder was placed in the common area on the 2nd Floor between the Women’s East and West rooms.

A Zoom H1 audio recorder was placed in the bedroom on the 2nd Floor of the Sherriff’s Living Quarters to act as a control recorder for the cat that was on the premises. 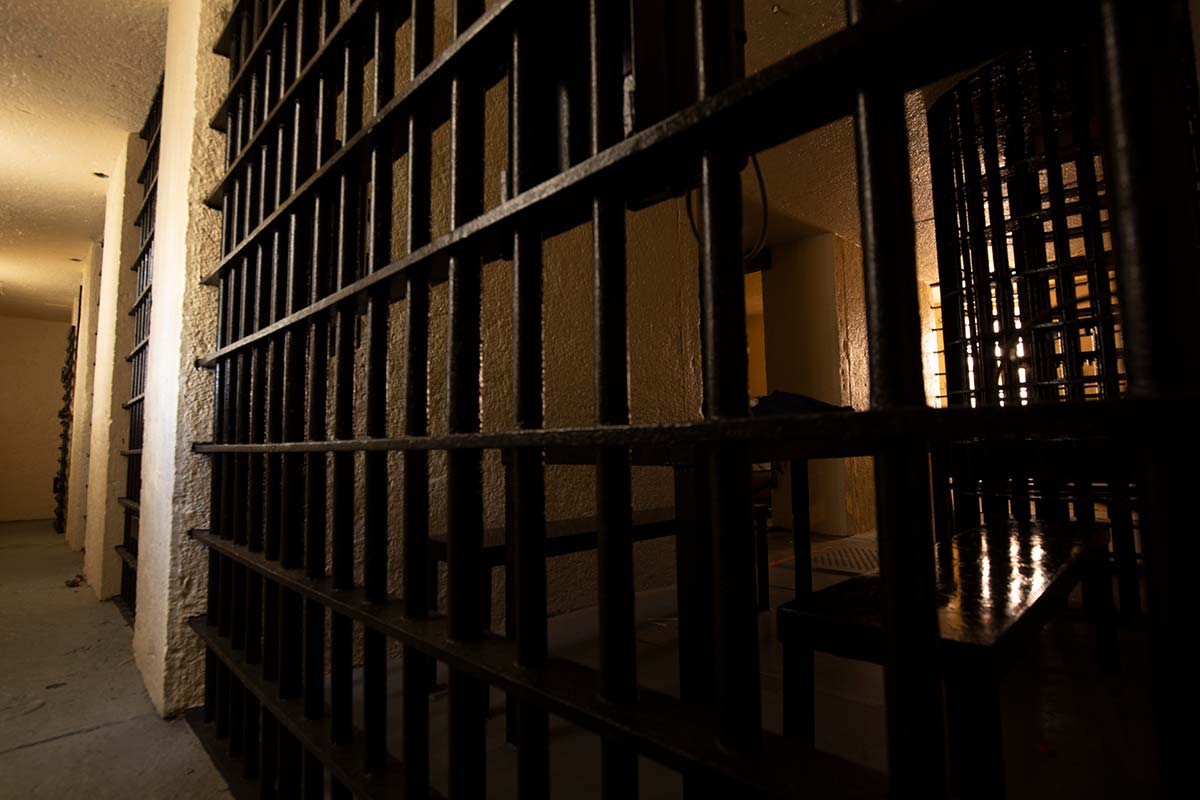 At 7:10 pm, the group went around the jail and began starting and time stamping all of their equipment. Time stamps, from a designated atomic watch, are used as a point of reference and make cross referencing easier during evidence review. From this point on, PIM members are required to speak in full voice and tag any noise they make.

Tagging is the process of calling out noises investigators make during an investigation. Noises investigators make can be anything from bodily sounds, such as stomach or breathing noises, to external noises, like squeaky shoes, shifting or chairs creaking. Tagging is required from the moment a piece of equipment is recording to the time it is turned off. This allows for easy identification of noises heard when reviewing evidence. When an investigator makes a noise, it is their responsibility to tag it or say “that was me”.

It was noted prior and during the investigation that church bells could be heard on the hour. The church bells were heard and noted at 9:00 pm and 10:00 pm. 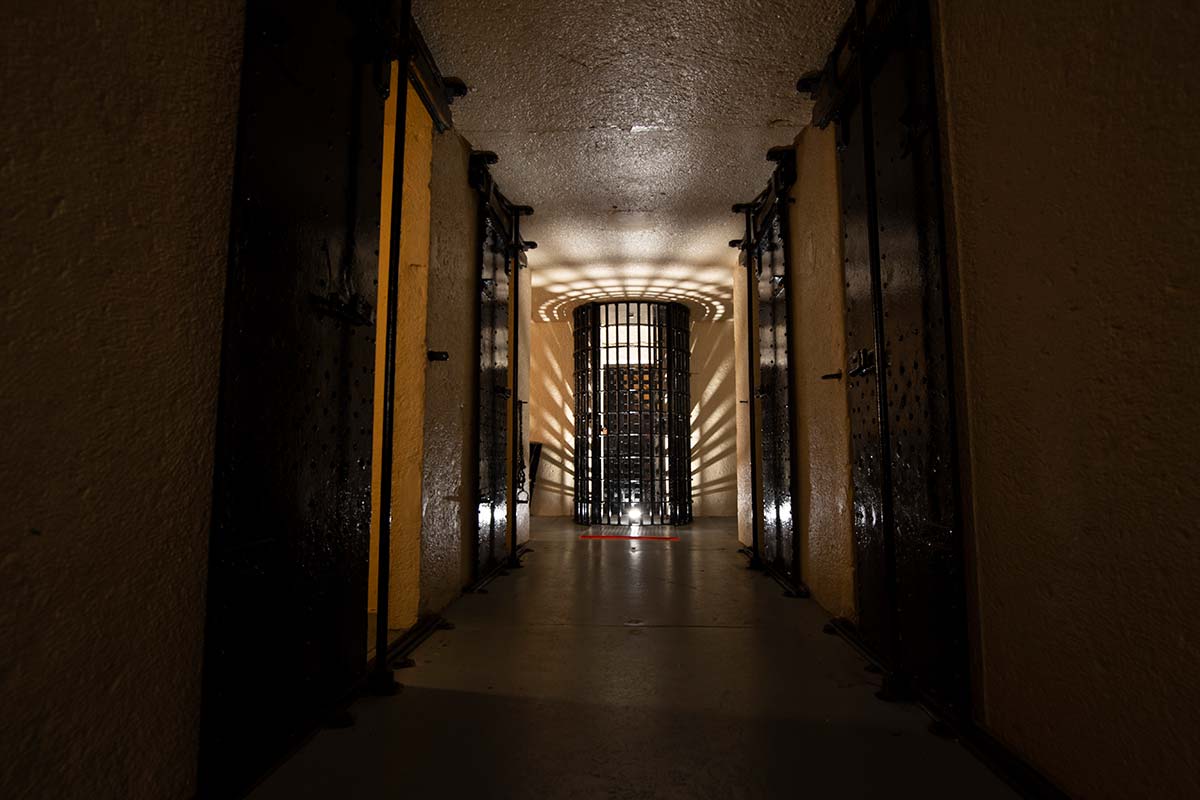 At 9:03 pm, as the group was getting situated to investigate the Basement, a battery pack that was used to power an infrared light began alarming. Gravy and Noah left to swap the dead battery out for a new battery while the rest of the team stayed behind and began investigating. Noah and Gravy returned at 9:19 pm and the group observed control silence from 9:20 pm to 9:24 pm before beginning an EVP session.

Control silence is the practice of sitting quietly and getting accustomed to the normal sounds of the building. It allows for investigators to get a baseline of normal building sounds.

An EVP (electronic voice phenomenon) session is the practice of asking questions and leaving ten seconds of silence in between, in hopes of capturing a response via an audio recording device. Rarely is a response heard by the investigator’s ears and when a response is heard by human ears it is called a disembodied voice.

It was noted during control silence, birds, traffic, a neighboring AC unit, voices from outside and a train could be heard in the Basement.
At 9:27 pm, the group heard what was described as the sound of shuffling feet across the floor above them. This occurred twice 15 seconds apart from each other.

No other activity occurred and nothing else was captured via audio or video recording devices. The group decided to move on to the next location.

From 9:55 pm to 9:58 pm the group observed control silence as the team members were spread throughout the Cell Block. Brandon sat in West Cell 1. Marilsa was in West Cell 2. Amber sat in East Cell 1. Tom sat in the rotating door space. Gravy sat at the Cell Block dining table.
It was noted that the same AC unit could be heard. Also sounds of traffic, voices from outside, and church bells.

At 9:59 pm, the group began an EVP session. Noah moved about freely through the jail jingling jail keys as a trigger object. No response to his actions were captured via audio or video recording devices. 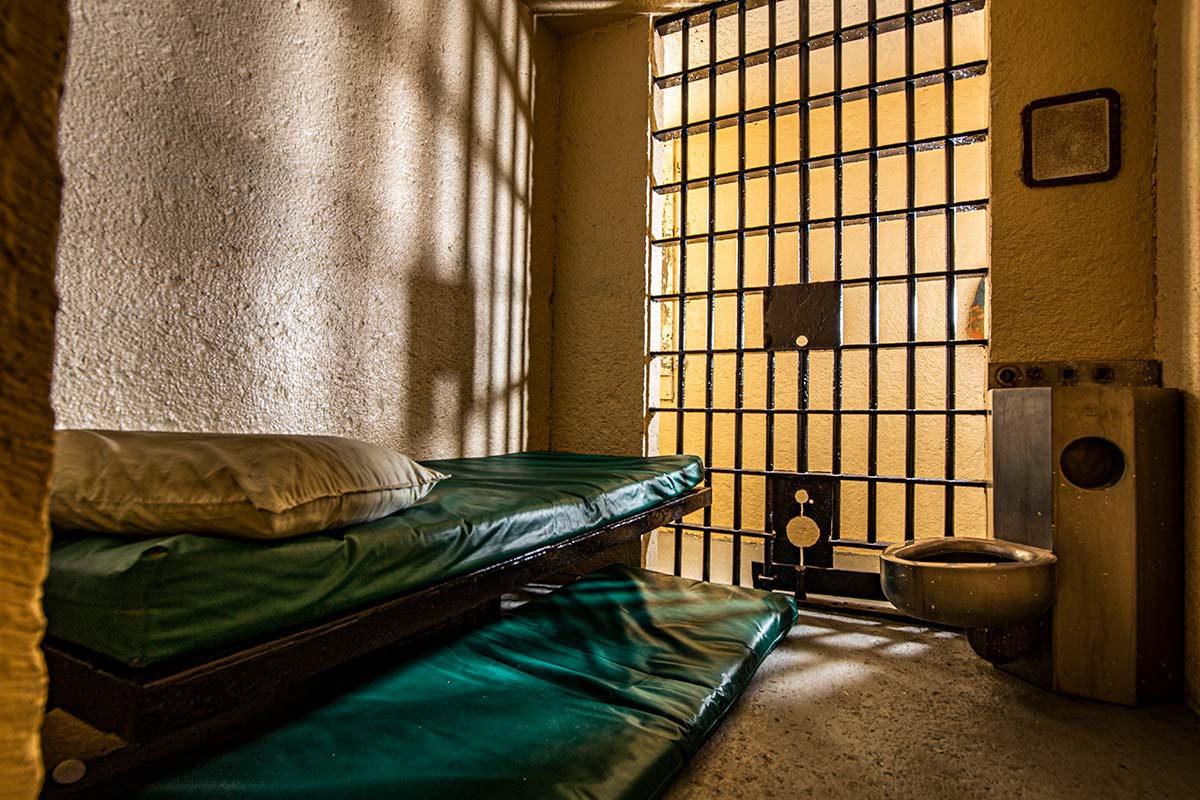 At 10:06 pm Marilsa and Amber both laid down on the cot in each of the cells they were sitting in to see if this would elicit a response. No response was recorded via audio or video recording devices.

During the break, Gravy took his audio recorder to the 2nd Floor of the Sheriff’s Living Quarters to act as a control recorder for the cat that had access to the front living quarters. During the investigation, the group made sure the doors between the living quarters and the Cell block area were closed in order to limit the space the cat could traverse and potentially contaminating more of the investigation than needed.

Since the group already performed control silence earlier in the evening, they got right to an EVP session.

At 11:10 pm, the group heard what was described as a metallic “ping”. After further investigation and several requests for the sound to be made again with no response, it was determined that the sound might have come from something dropping on the Cell’s metal mechanics that were under the Cell Blocks. PIM did not believe this to be paranormal in nature.

No other activity occurred during this time and the group moved to their final location for the evening.

Again, no control silence was conducted and the group began with an EVP session. No activity occurred during the EVP session.

It was at this the time the group made a collective decision to pack up their gear and leave for home rather than spend the night on location. The group proceeded to gather their gear, load up the van, lock up the building and leave for the night.

This was PIM’s first time investigating the Old Blackford County Jail.  Structurally the building was in good shape and the location was large enough to accommodate our group, however, due to the cat living on the premises and some of the rooms currently being used as living quarters, PIM was limited to investigating certain areas of the building. For PIM to return to this location would require no living animals on the premises at the time of the investigation. Any noise that could have been made by the cat had to be dismissed as evidence.

We would like to thank Dann for allowing us to investigate this location as we do understand, in order to accommodate, he does leave the premises for the night; giving us access to his place of residence.