At 7:09 pm, Amber went outside and collected outside weather conditions with a Kestrel 2500 Weather Station. The Kestrel Weather Station is a tool that measures temperature, wind speed, barometric pressure and humidity. At 7:55 pm, baseline EMF readings were taken with a single-axis EMF Mel-8704R Meter (see table below). The PIM team started preparing equipment for the investigation. Later, the team left the building for quiet time. 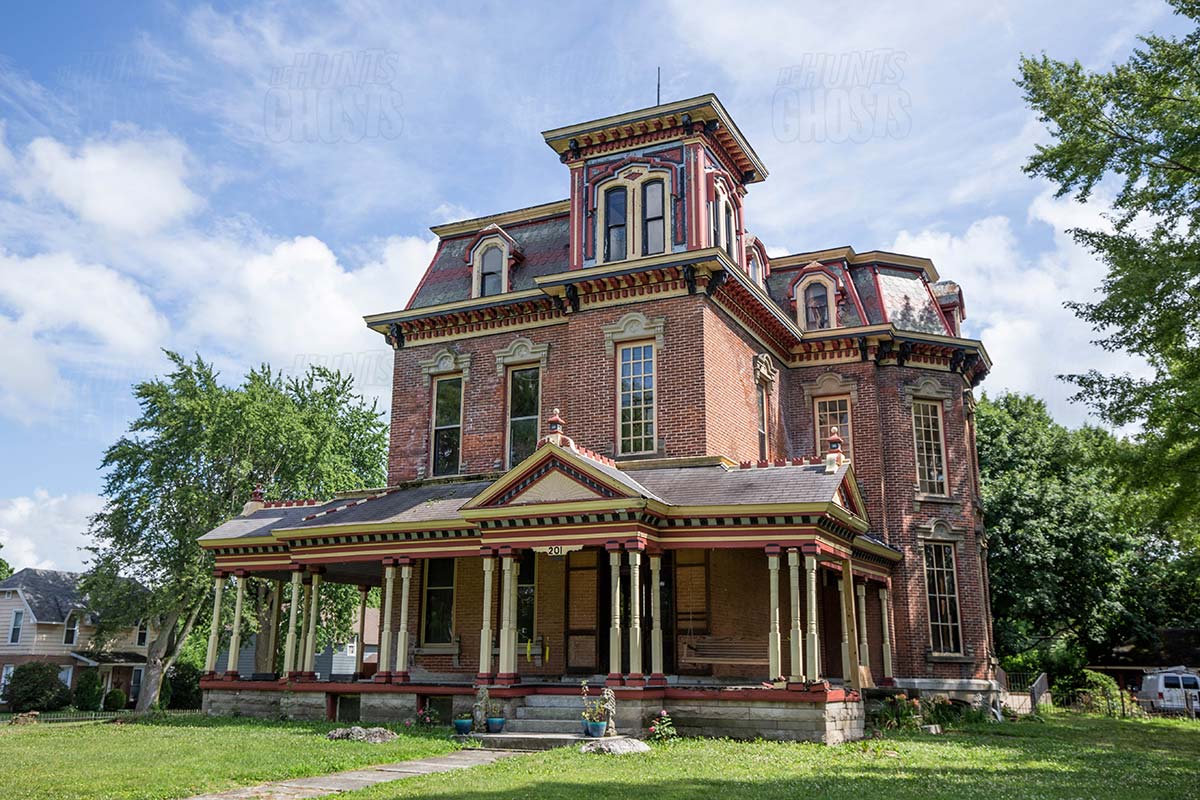 Every PIM member activated their personal equipment. Every member carries a control recorder, a Zoom H1 digital audio recorder, that goes everywhere with the investigator. The control recorder is started and time stamped prior to all other equipment being started and time stamped. Also, it is the last piece of equipment turned off at the end of an investigation. Control recorders are used not only as another recording device but also to capture sound contaminations that an investigator might create during an investigation. The control recorders are placed in a Faraday cage. PIM’s main goal in using these cages is to block radio signals from interfering with their audio recorders, thus preventing false electronic voice phenomena (EVP).

In addition to control recorders, every PIM member is equipped with an Extech RHT50 data logger and a Boblov video camera. The Extech datalogger measures humidity, temperature and barometric pressure at one-minute intervals. This device allows us to graph these readings and compare data to other devices that might have measured or recorded an event. The Boblov body video cameras can record in visible and infrared lighting. Both the Boblov video camera and the Extech RHT50 datalogger are turned on at the same time as the Zoom H1 control recorder.

Time stamps, from a designated atomic watch, are used as a point of reference and make cross referencing easier during evidence review.
Once the personal equipment was on, the team went to the different equipment set-ups to turn them on and to time stamp the recording devices.

In the Piano Room (1st Floor), a Sony HDR-CX160 multi-spectrum camcorder and a Zoom H1 digital recorder were placed. A DM X-930 Dark Matter detector was placed on top of the piano, along with many trigger objects: 2 bullets, cigar, cigarettes, Joker card, pair of dice (2 ones facing up), Playboy magazine, whiskey, Bible, crucifix, Holy Relic, Rosary, magnetic levitator, and Holy water. In addition, a Sony FDR-AX100 4K camcorder was facing the West Parlor.

On the bottom of the stairway (1st Floor), a Sony HDR-CX440 multi-spectrum camcorder was positioned to cover the stairway and the main door. Another Zoom H1 digital recorder was placed in the same area.

On the 2nd Floor, a Sony HDR-CX160 multi-spectrum camcorder was placed in General Stone’s Bedroom (east side) along with a Zoom H1 digital recorder.

On the 3rd Floor, a Sony FDR-AX53 4K camcorder was placed along with a Zoom H1 digital recorder and EDI+ Datalogger. Trigger objects were placed on the landing. These were: a toy horse, a small doll, a stuffed bear, a stuffed cat, a harmonica, a PIM platter (Ouija version), touch flashlight, and a Confederate hat.

After the equipment setup was completed, the team left the building to allow the equipment to record with no one else in the house.
At 8:25 pm, the PIM team entered the building. The cicadas and crickets outside were noted to be easily heard inside the house.

Noah was in the East Parlor , Gravy was in the Piano Room, Brandon near the threshold of East Parlor, Tom in the West Parlor (away from the catalogue homes), Marilsa in doorway to hallway to the Kitchen, and Amber sitting at the base of the Main Staircase.
At 8:34 pm we started control silence. During control silence, cooling fans from IR lights, traffic noise, neighbors outside catalogue homes talking, and rhythmic water drops from earlier rain were all noted. 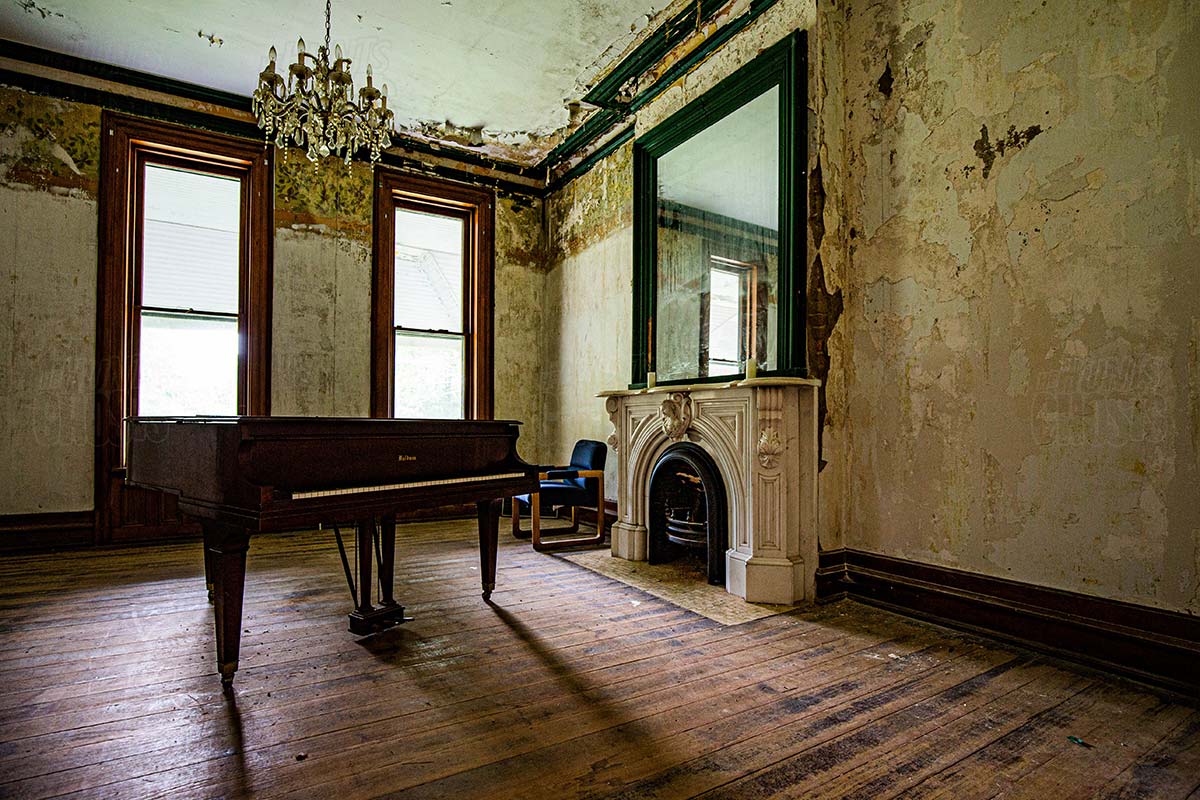 At 8:38 pm, the EVP session started. No events were noted during this session and the team moved to the 2nd Floor. 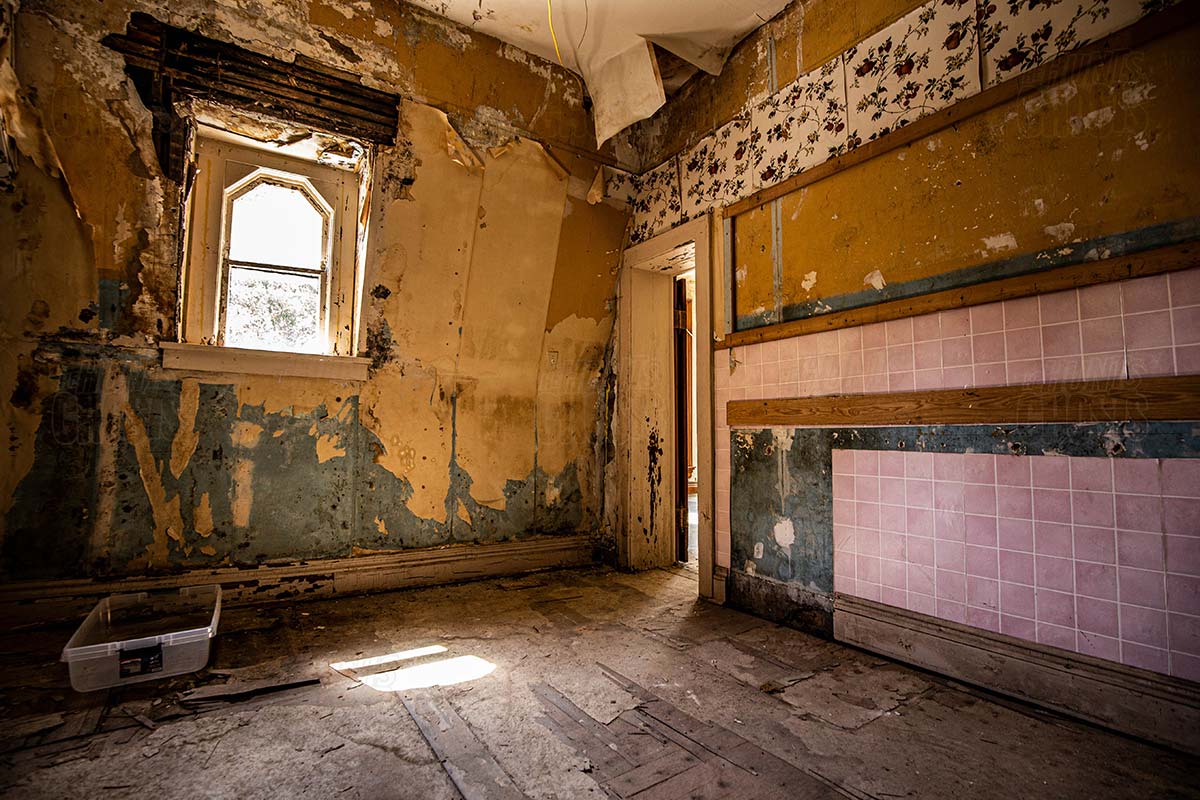 At 9:20 pm, light play on hallway walls by vehicles driving down the road towards the mansion. This may explain some of the shadows reportedly seen on the curved wall of the hallway on the 2nd Floor.

At 9:28 pm, a sound like a thump was heard by Noah and Amber, but the noise was not recorded on any audio recorders.

No other events happened during this session and at 9:37 pm, the EVP session ended and the team moved to the 3rd Floor.

Tom was on the landing in back of a little narrow hallway, looking down to the 2nd Floor, Amber was in the westward facing hallway, Noah was in the east facing back room, Gravy was in the main room on top of stairs along with Marilsa and Brandon.

At 9:41 pm, PIM started control silence, with similar sounds as during the previous sessions noted.

At 9:45 pm, musical notes were heard by Amber emanating from somewhere in the house. However, the music was not picked up by any audio recorders and it is unknown where it originated.

At 10:05 pm, the team ended the EVP session on 3rd Floor the team headed to the Basement to continue the investigation.

From 10:06 pm until 10:09 pm, PIM conducted control silence. Traffic and nearby neighbors’ conversations were pointed out during this time.

At 10:17 pm Amber and Marilsa heard two sounds like taps, one possibly emanating from upstairs. In addition, a tap noise was heard above Marilsa, coming from the 1st Floor. No known cause for the taps was noted, but it was not determined to be paranormal.

No other events of note occurred during this session and at 10:29 pm, the EVP session ended and the team decided to take a break. 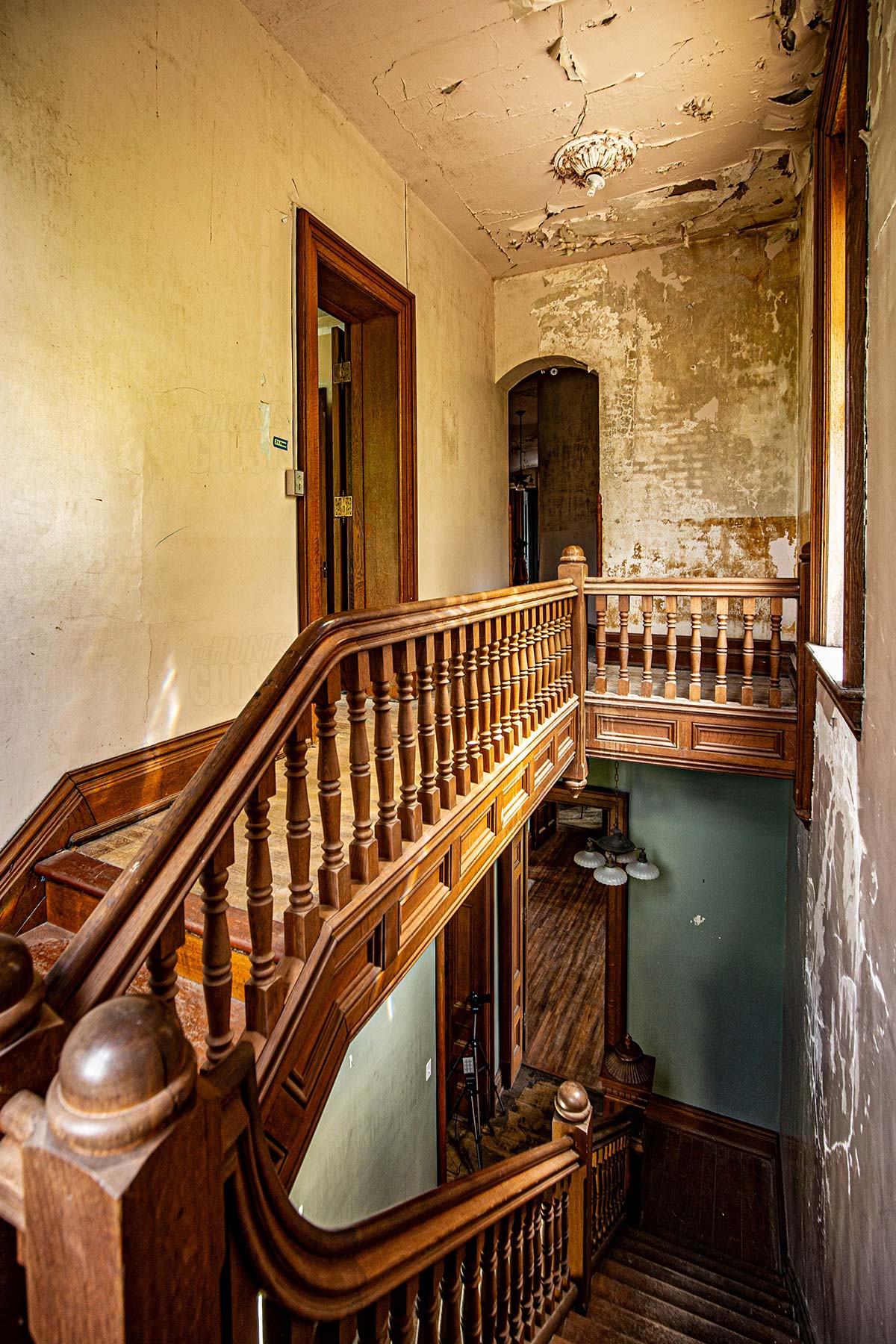 Noah was in the hallway to the Kitchen, Gravy was in the East Parlor, Amber and Marilsa were in the Piano room, Brandon was in the West Parlor and Tom was on Main Staircase.

At 11:24 pm, Tom and Amber heard what sounded like someone knocking on the floor twice. No explanation for this noise was determined, but most likely a building noise.

At 11:30 pm, Noah and Marilsa heard a female voice. This was not captured on any recording devices.

At 11:34 pm, the EVP session ended and the team proceeded to the 2nd Floor.

Amber was at the bottom of stairs on the 1st Floor, Tom was at the curved wall of the corridor, Brandon was in General Stone’s Sitting Room, Noah was on the landing of the main staircase, Gravy was at the end of 2nd Floor hallway and Marilsa was in Lydia Preston’s Sitting Room. 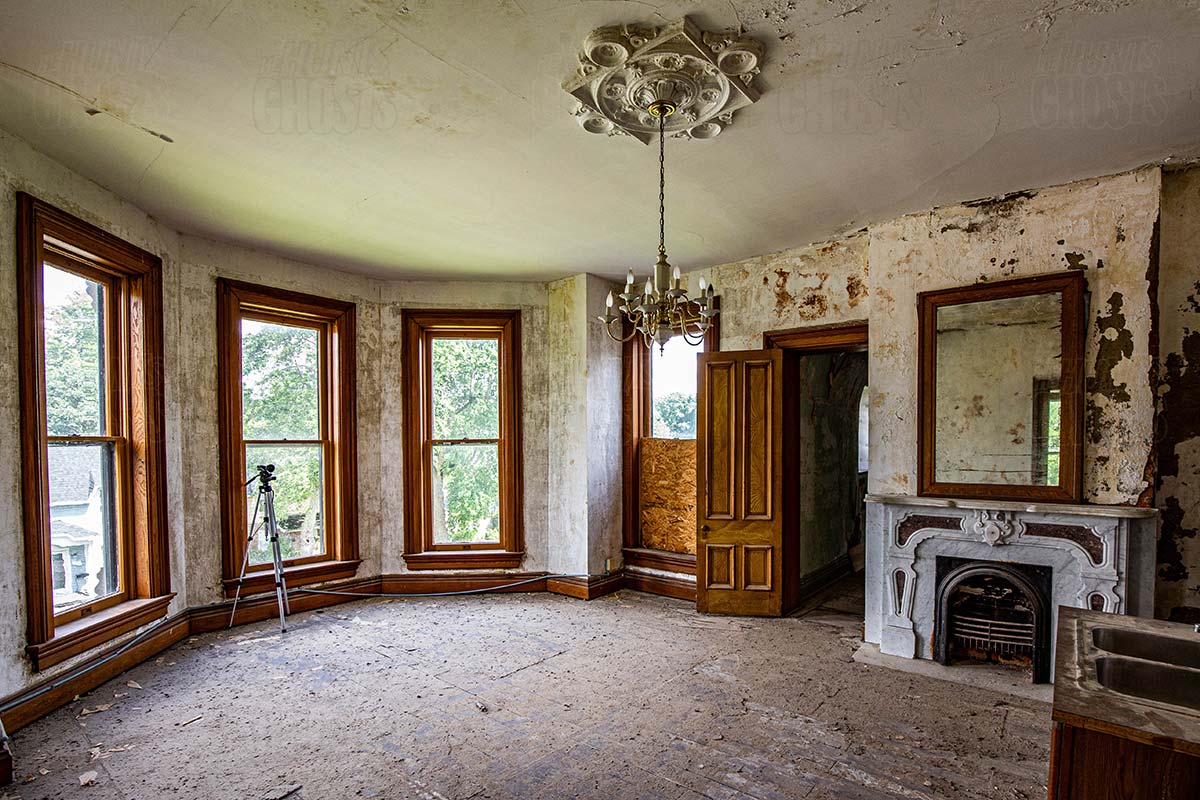 At 11:41 pm, Noah heard a falling or shifting sound coming from what he thought was the 1st Floor. He went to investigate and inform the team that nothing was out of place but noted paint chips on a window above the stairs (the only window with stained glass). He stated that it was most likely paint chips falling on the ground.

At 11:51 pm, Noah heard a stomach sound but no one tagged themselves.

At 11:58 pm, no other activity occurred during this session and the team decided to end the investigation.

The investigation presented challenges because of the current ongoing renovations of the mansion. At the time of our visit, the mansion does present some areas where a visitor could get injured due to the renovations. This limited the ability to investigate certain areas of the mansion. Groups need to be careful when investigating at night. Noise contamination from cars and neighbors were noted, and lasted well into the evening. The lights of vehicles driving down the street and shining onto the house created shadows inside the house that investigators could mistake for a paranormal event. We were able to provide some possible natural causes for some of the claims in the building. PIM hopes that the owner’s continue to restore the property to allow for full use of the mansion, along with adding in air conditioning. PIM would like to see groups continue to study the site to help build upon the investigations thus far.