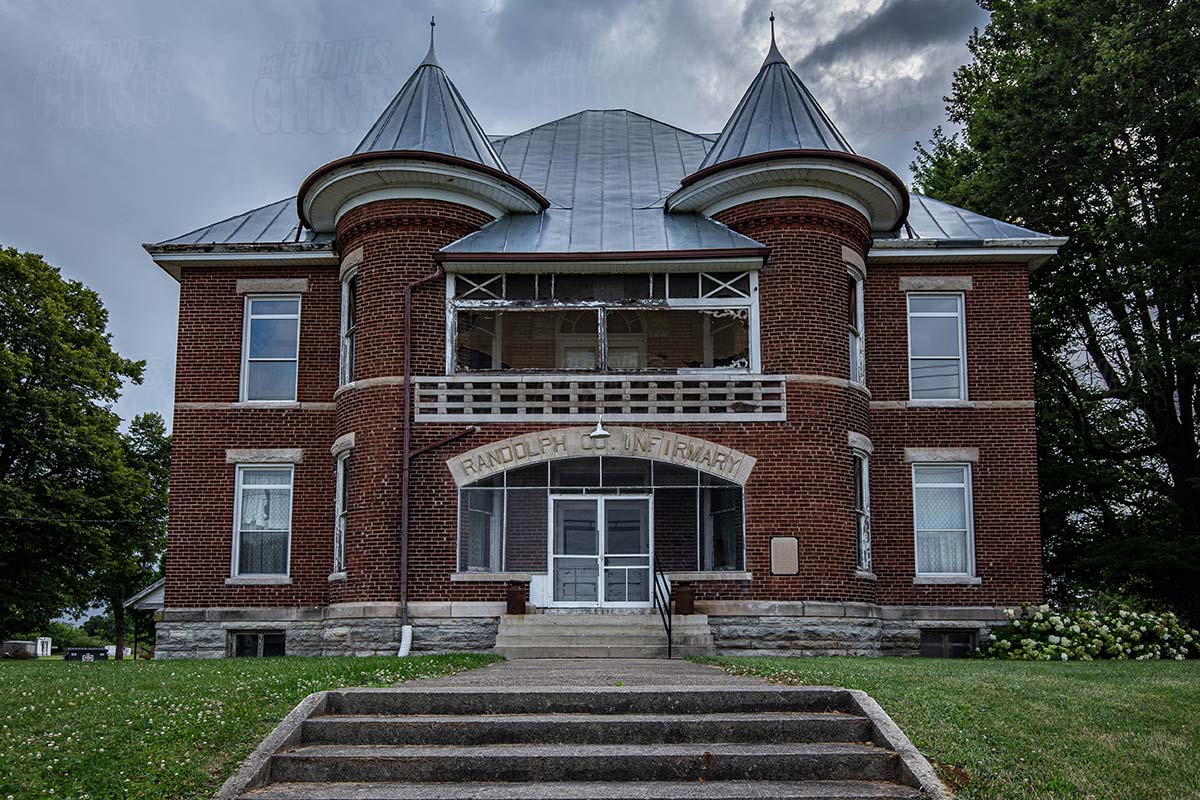 In the Attic, the team placed a trigger object bank consisting of two bottles of whiskey, a magnetic levitator and a variety of other objects left by prior investigators such as coins and playing cards. Immediately next to objects, a Ghost Pro 2 multi-spectrum video camera, EDI+ Datalogger, and an H1 audio recorder intended to capture any movement of the objects as well as any fluctuations in the environment.

A trigger object bank was placed in the middle of the 1st Floor-Men’s Wing Hallway. The group of items consisted of a touch flashlight, two cigars, two cigarettes, Deck of cards (Jack of Clubs upward facing), two bottles of whiskey, Bible, Crucifix, Rosary, Straight-edged razor, and a Harmonica. Alongside the items, a number of measurement devices were placed, including a DM X-930 Dark Matter detector, a Zoom H1 audio recorder, a geophone, and finally, a Ghost Pro multi-spectrum video camera.

Further down the 1st Floor-Men’s Wing Hallway, a Sony HDR-CX160 multi-spectrum camera, accompanied by a standalone IR light panel, was stationed to capture both the trigger object bank and hallway throughout the night.

Across the main dividing wall, in the 1st Floor-Women’s Wing, a Sony HDR-CX160 multi-spectrum camera and an EDI+ Datalogger were placed inside of the Doll Room, with a Zoom H1 audio recorder positioned just outside the doorway.

In the Basement Kitchen, the team placed a Sony HDR-CX160 multi-spectrum camera aimed to capture the Kitchen as well as the entrances to the two main hallways that run on either side of the Basement. Near the camera, both an EDI+ Datalogger and Zoom H1 audio recorder were stationed on the kitchen island where items reportedly move on their own.

A Sony HDR-CX160 multi-spectrum camera was placed in the Basement Hallway just outside of a room where an inmate of the facility reportedly hung herself.

Further down the hall in the Basement-Shower Room, a Sony HDR-CS550 camera and Zoom H1 audio recorder were placed.
After equipment setup was completed, at 7:27 pm, the team moved throughout the building, beginning in the Attic, turning on recording devices and giving timestamps as they went. The team then took a short break before beginning their investigation.

Following the move to the Attic, the team began their investigation with control silence. Investigators noted hearing a metal vent that was squeaking in the ceiling, traffic noise, and the IR lights that provide illumination for multi-spectrum cameras, the time was 9:15 pm. Within a minute or so, the team found places through the Attic and began the first EVP session of the night. 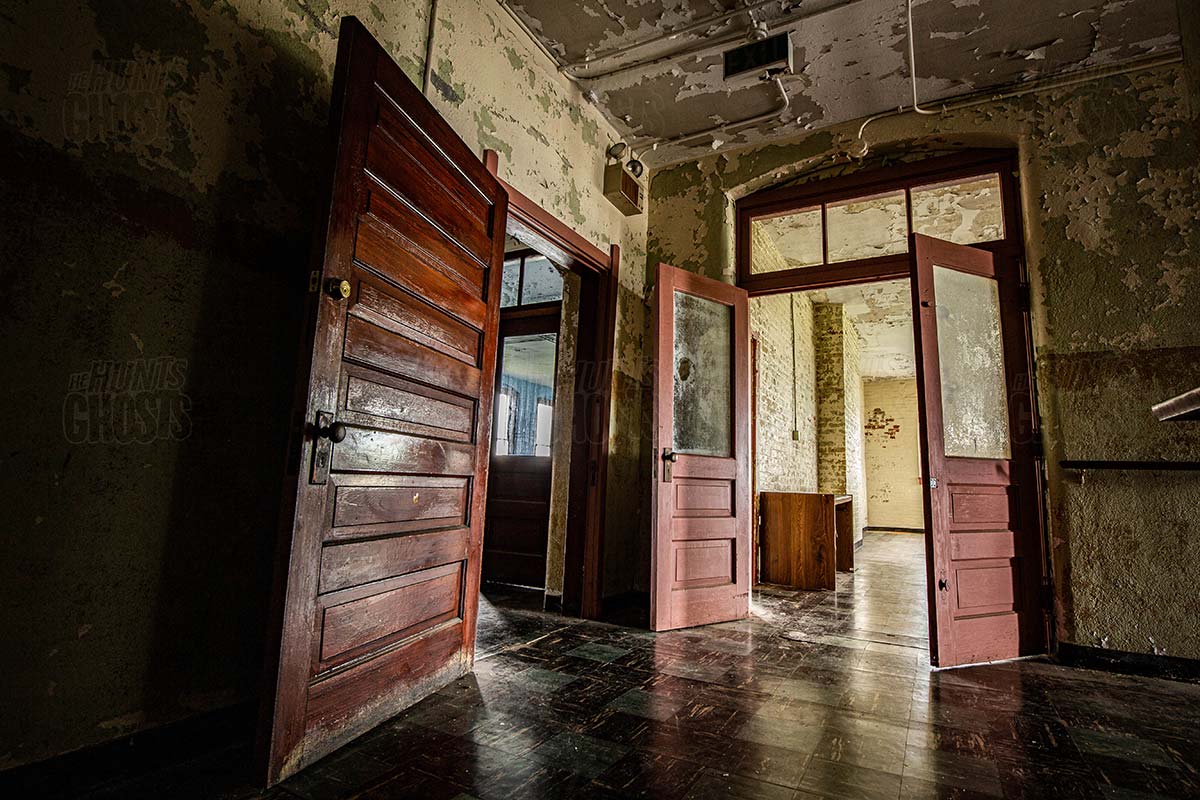 After a while at 9:25 pm, Brandon noted that his chair had moved on its own, describing it as though one of the tripod legs had been tugged. Shortly thereafter, both Gravy and Amber reported hearing a large amount of movement around the west side of the Attic where they were sitting. Amber said, more specifically, that the sound resembled footsteps. However, Gravy was under the impression that the sound could have been made by an animal. Tom moved into the area at 9:29 pm with a flashlight to help check for the source of the noise, but the investigators were unable to find it. Shortly thereafter, at 9:34 pm, Noah made his way across the Attic and used a FLIR thermal camera to check for any obvious wildlife, finding none. After about a minute, after Noah returned, the EVP session resumed.

A shifting noise was heard near both Gravy and Amber at 9:45 pm. Neither investigator had shifted.

At 9:48 pm, Brandon reported something colliding very hard with the back of his glasses, as though something small had been thrown at him. Noah, who was sitting nearly twenty feet behind him heard the noise, and an audible pop could be heard on his audio recorder as well. The team did their best to investigate the situation, attempting to find the object or source, but nothing was found. Shortly thereafter, the EVP session was resumed, at 9:51 pm.

At 9:55 pm, the EVP session in the Attic was concluded, and the team headed for their next location.

After the team proceeded to the 2nd Floor – Men’s Wing Hallway, the team spread out through the hallway, positioning themselves in front of the patients’ rooms. The investigators began control silence, the time was 10:00 pm. Amber noted, at 10:02 pm, that during the control silence she had heard a low hum that didn’t seem to have an explanation. Immediately thereafter, the EVP session in the 2nd Floor – Men’s Wing Hallway was started.

At 10:17 pm, Noah, who was sitting at the end of the hall, commented on how light coming in from the highway immediately outside of the building made it look like shadows were moving down the hall. Within a minute or so, and without any further notable occurrences, the team concluded their EVP session.

After the move, each member of the team found a space in front of a former occupant’s room to occupy. Then, at 10:21 pm, as this location was right next to the 2nd Floor – Men’s Wing Hallway, control silence was not performed. The investigators moved immediately on to an EVP session. 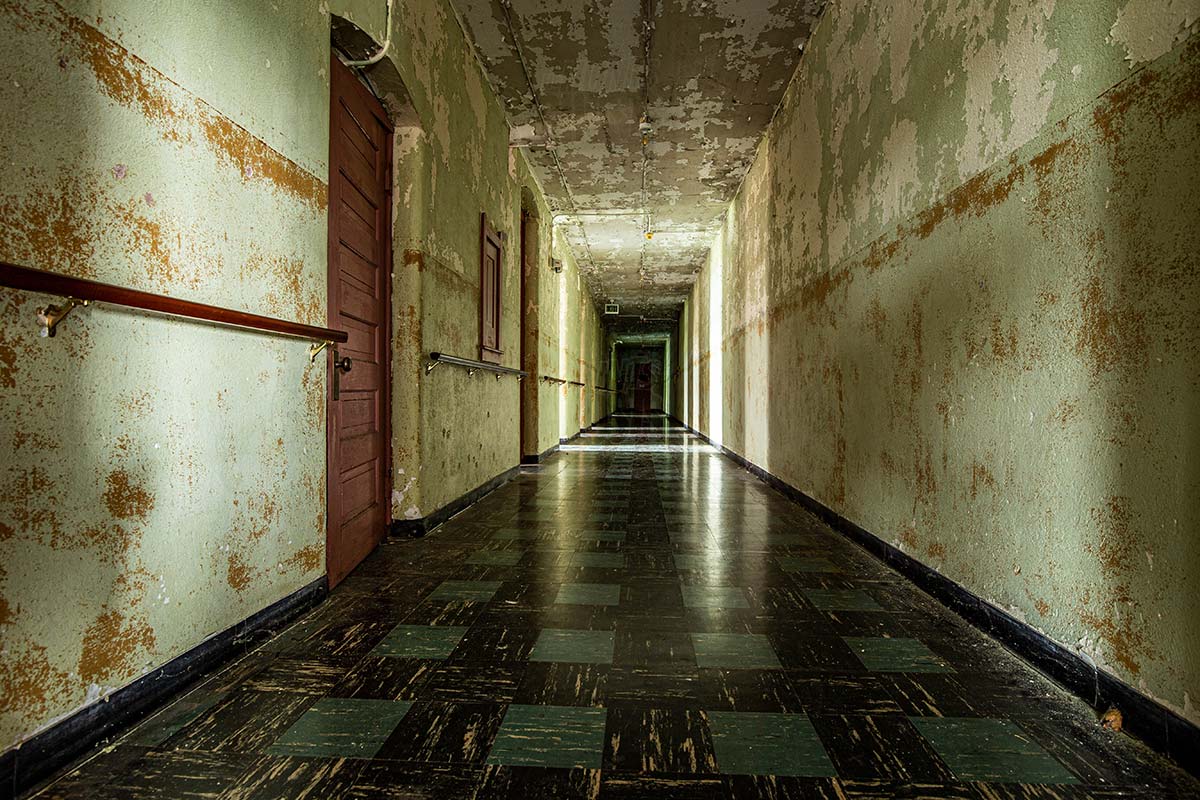 At 10:24 pm, Noah asked, “Is it okay to run in the hallways?” A noise was heard by the entire team, described by Amber as a shuffling movement. After asking for this sound to be repeated, a similar, quieter noise was heard.  The cause of these noises was not found.

Later at 10:34 pm, after posing numerous questions with no response or activity, the team decided it was time to change locations and headed to the 1st Floor.

After a while at 10:47 pm, Amber reported hearing a whimpering sound, asking first if it was either Brandon or Tom’s stomach making noise. However, neither had heard the sound themselves. Shortly thereafter, with no further activity, the team decided it was time to set up a Facebook Live in the 1st Floor – Men’s Wing Hallway, at 10:51 pm.

Following the move to the 1st Floor – Men’s Wing Hallway, the team set up lighting and began streaming live video of their investigation.

At 11:06 pm, after Marilsa asked, “Did you watch your own funeral?” a loud shuffling noise was heard down the hallway. The question was repeated, but the sound was not heard again.

Then, at 11:11 pm, the Facebook Live EVP session was concluded. The team took a short break after performing the live stream and prepared to head to the Basement next.

After the team proceeded to the Basement, the investigators moved down to the Basement Corridor to continue their investigation, spreading throughout the main corridor. Almost immediately thereafter, the team began control silence. after the team discussed the natural sounds they heard in the space, such as rain dripping and traffic, an EVP session was started, at 12:02 am. 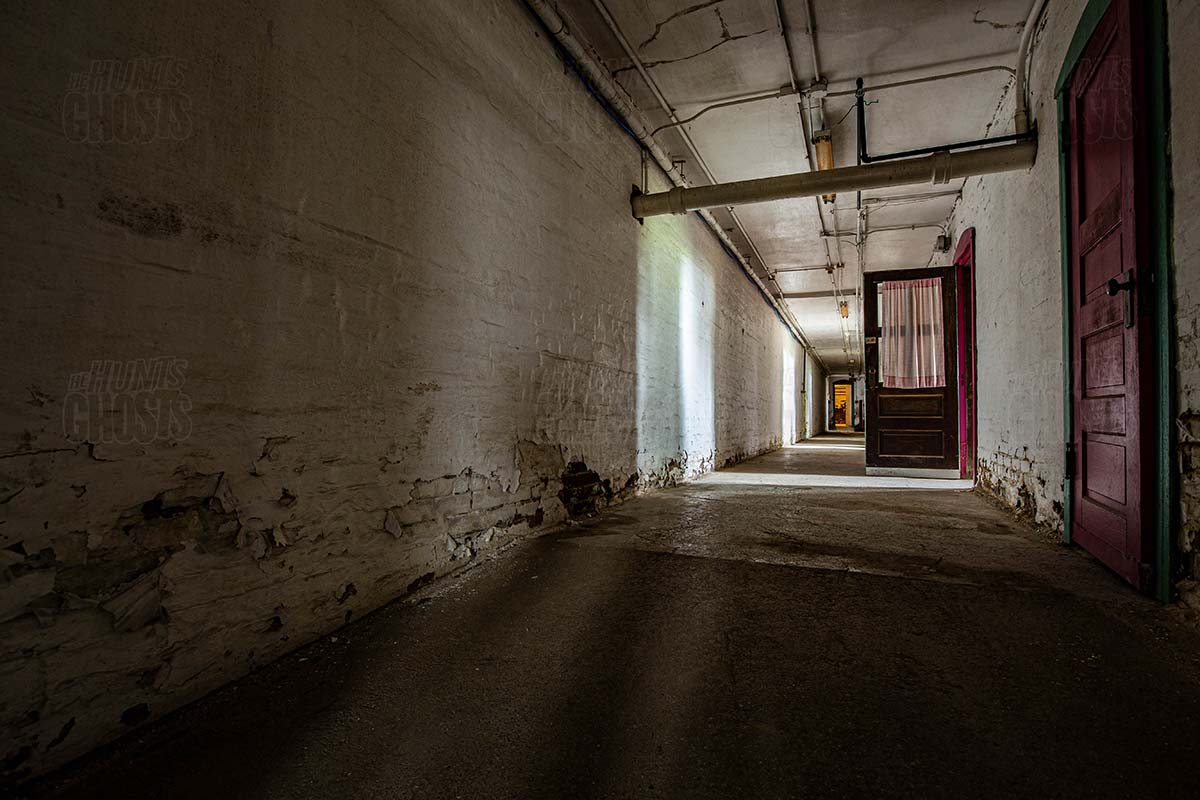 At 12:06 am, Amber reported to have heard a noise nearby that she described as a female voice, this was also heard by Brandon. It was noted that a car had gone by at nearly the same time, but both investigators noted that the car’s passing had occurred after the sound.

Later at 12:06 am, The team further questioned, mentioning that they were not able to make out what the voice said and asking for the source to repeat itself.

After a while at 12:10 am, both Noah and Amber reported hearing a thumping or banging noise, akin to a door slamming or a heavy object moving. During the report of the event, it occurred again, and was captured on recording. The team did note that it could have potentially been a car moving past the building. However, no traffic was currently moving past the building at the time the noise occurred.

The team then decided to conclude the EVP session andmoved into the Basement Kitchen, where many have reported to interact with Doris, a long-time kitchen worker for Randolph County Asylum, at 12:19 am.

After the move, the team spread throughout the Basement Kitchen, including the two adjoining rooms, being sure to stay within line of sight of one another.

At 12:21 am, once settled, the team began control silence.

Later at 12:22 am, Brandon reported the scent of cigarettes. However, no other investigators were able to smell this. Although it is important to note that investigators were spread out in the room, it is also important to note that “phantom smells” are often entirely debunkable, as porous materials such as wood and carpet soak in scents and can release them during changing weather conditions. 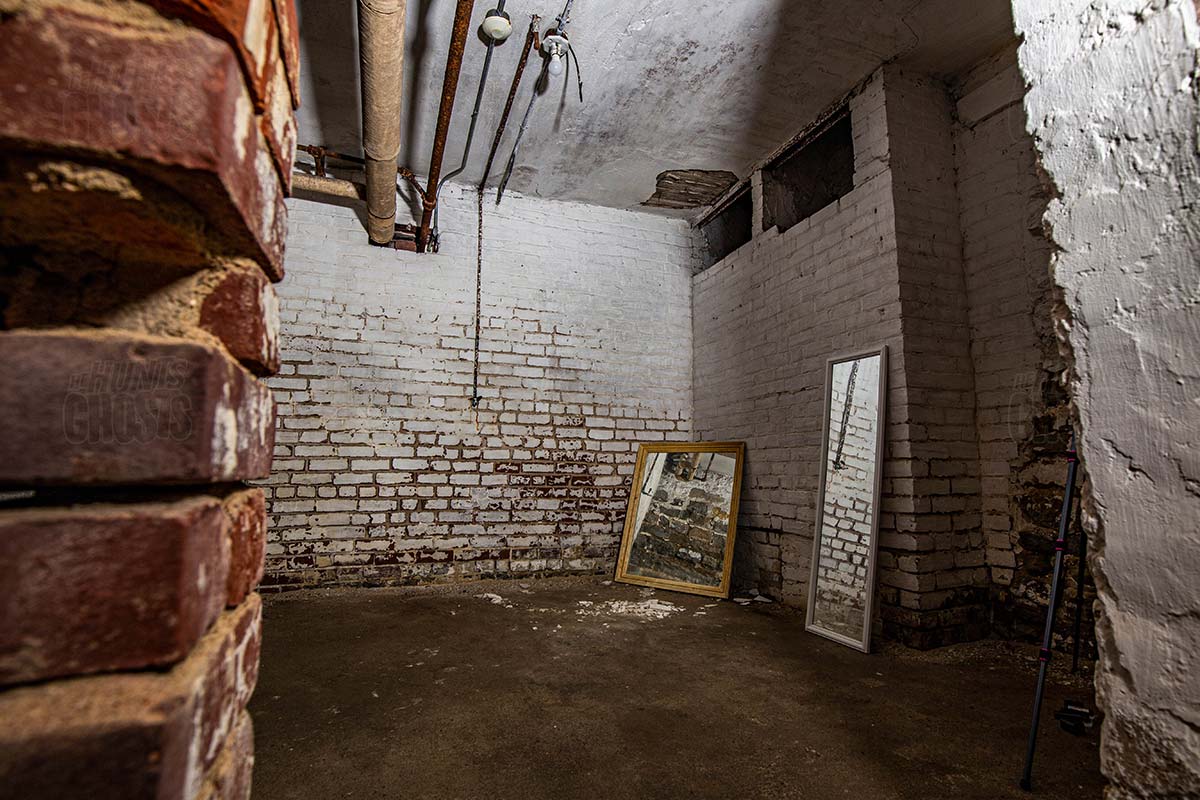 After a while at 12:25 am, control silence was concluded, with the team noting that the only noticeable noise contamination present was the hum of IR lights.

At 12:28 am, Amber reported hearing a shuffling sound, at first believing it to have been Tom. However, Tom had not moved.

At 12:35 am, the EVP session was concluded. The team discussed where in the building to investigate next, deciding to head to the Attic.

Once in the Attic, the team spread out throughout the floor, and immediately began an EVP session.

At 12:47 am, Brandon noted a tapping or clicking noise behind Marilsa. The source of the noise could not be found. However, there is a reasonable chance that it was debris falling from the ceiling. This noise occurred a number of times during the EVP session.

After a while at 12:55 am, the team decided to conclude their EVP session in the Attic, and headed to the 2nd Floor.

Following the move to the 2nd Floor – Men’s Wing Hallway, the investigators spread throughout the hall, and began their EVP session. 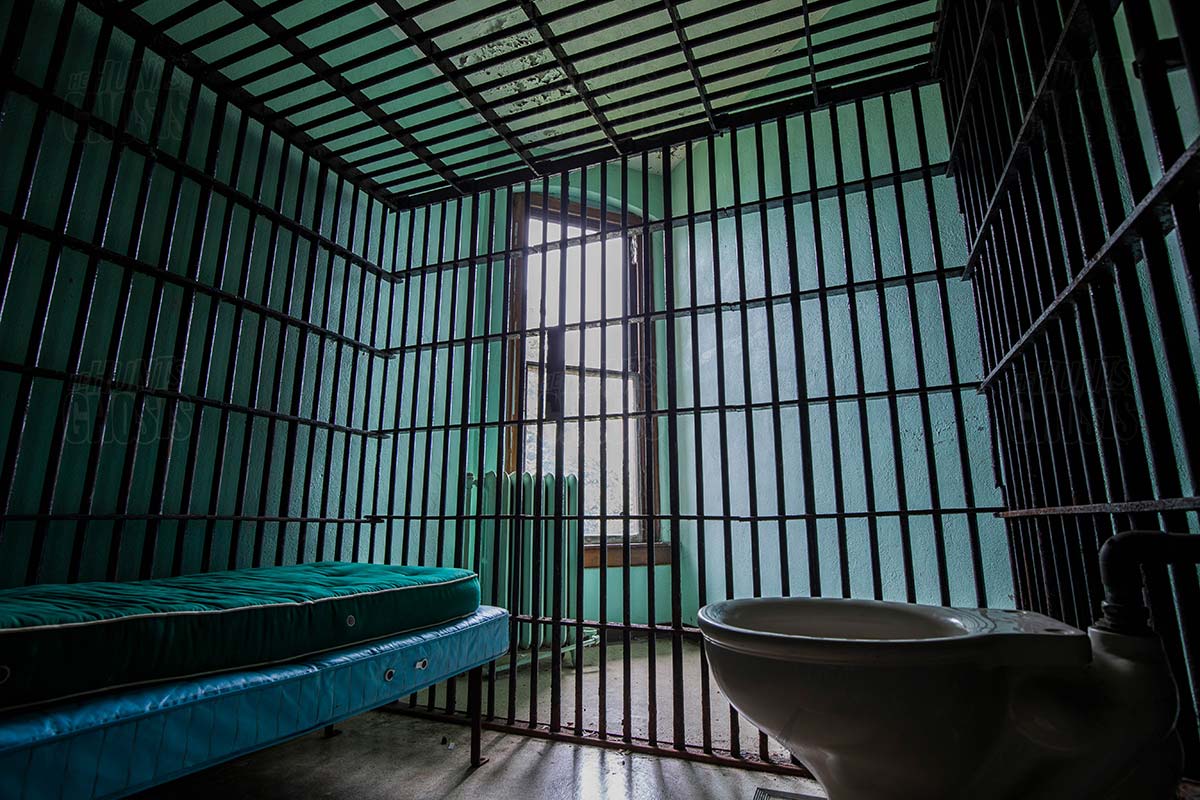 With almost no notable occurrences, the team concluded their EVP session, and decided to move down to the 1st Floor to finish off the investigation in the Men’s Wing, at 1:06 am.

At 1:17 am, the team continually asked questions to which no response was noted. Team members even tried to gently provoke any present entities, again to no avail.

Later at 1:18 am, the final EVP session of the night was concluded, and PIM members moved to pack their gear.

PHOTO: Due to the nature of photo evidence, PIM does not believe photos are true evidence of the paranormal. However, photos are taken for baselines and documentation of trigger objects starting positions.

Although an ultimately quiet night, the Randolph County Asylum provided our team with a number of personal experiences. We’d like to thank the very welcoming team of caretakers who tend to the location, and we hope to investigate here again.