This is clearly an image of a ghost, captured by one of our investigators with some professional photography gear at Bobby Mackey’s Music World! The spirit appears in one image and not in the next, making it even more convincing. This is solid proof of the haunting that surrounds the location – or is it? 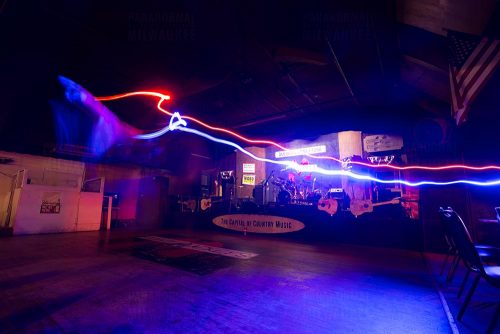 While setting up for the investigation at Bobby Mackey’s Music World, during our most recent Expedition, a photographer on the team produced a jaw-dropping image of a ghostly light with a non-corporeal arm extended, pointing to the back of the music hall. There were two images taken in immediate succession, one capturing the spectral figure and the other just showing the empty room. Clearly this photograph is extremely impressive evidence of the paranormal!

PIM doesn’t just take a single image and assume something paranormal is happening in it. Let’s take this opportunity for a critical look at everything happening at that time the image was capture, as well as the image itself, just to be sure that we absolutely have a real ghost on camera.

Eyes on the prize 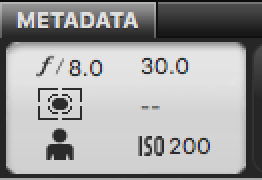 Let’s take a look under the hood of the photo itself. Using tools to view the camera settings for our spooky image (EXIF data, for those playing along at home), we can see that the aperture was set to a relatively narrow 8.0, which means that the photographer was trying to get a lot of the scene in focus (narrow apertures are shown in higher numbers, and the higher the number the more of the scene’s depth will be sharp). However, a narrow aperture would also mean that there would be less light reaching the camera’s sensor (eyes, if you prefer). Think of the aperture as eyelids, if you squint, things will be more in focus, but darker.

How, then, is the photo so bright?

The speed of light

Continuing our analogy with the camera’s sensor as its eyes, we can consider how our eyes function in the dark. The longer we’re exposed to a dark room, the better we can see in it – this is because our eyes change to allow more light in, but cameras are simply collecting data. So, the longer a camera looks at a dark scene, the more light it is collecting, allowing it to show a brighter final image.

This brings us to the shutter speed of the image, which for our analogy would be how long the camera keeps its eyes open toward the scene, collecting light all the while. Normally this number, in a regular day lit room, would be in the fractions of a second, but this shot is a full 30 seconds. That is a very long exposure, so the room must have been extremely dark.

Why should we care about this? Because of a unique side effect of a long exposure. Movement. Any seasoned photography would be able to tell that our ghost image had a long exposure time due to the streaks of light, meaning that there was movement of light in the image.

Blinded by the light

So, we’ve covered that the longer a camera has its eyes open, the more light it will gather, but this doesn’t account for the varying brightness of the light. If, while the camera is looking, there is a bright light, that light will be recorded more easily. If you think about a camera’s flash, this is the case. Below is an example of a camera taking a long exposure (you can tell because the subject is blurry), with the light also hitting stationary objects (making them frozen and clear).

So, now that you’re basically a professional photographer, let’s combine all of the concepts we’ve covered. We know that we had a long exposure (due to the room being dark and the photographer trying to get the whole place in focus), and that light shows up prominently in long exposures (with streaks that indicate if it is moving). This is definitely enough data to work out that this image is likely not supernatural, and well done if you’ve figured it out by now – however, we do have some more concrete evidence to put a nail into this ghost’s coffin.

If you aren’t familiar with the group, PIM uses a method called “control recording”, which is to say that every investigator has a recorder on their person at all times, synced via timestamp, that we can review against one another. Simply put, we have a lot of recordings, from different places in the location, searchable to an exact moment in time during our investigations. This allows us to check many angles of an occurrence during our visit.

When we listen to the photographer’s audio recorder when the image was taken, as well as all other investigators in the area at the time, we have a conclusive answer. Quick warning, it’s a bit of a bummer.

Shining a light on the matter

When we sync up the audio recordings that were captured, we get a very different idea of what was happening at the time the image was taken. Our investigator/photographer, Brandon had just set down his camera and tripod, aiming them across the dance floor to the stage for a photograph as the rest of the team was setting up for the investigation. He dialed in his settings, realizing he needed a long exposure and snapped the photo. At this exact time, another investigator, Marilsa, moved through the frame with a headlamp on toward some equipment across the dance floor. Hence the light streaks from the right of the frame to the left and the arm, which was Marilsa’s, lit by her headlamp while she was pointing.

In the recording you can clearly hear Brandon say, “Dang, you’re in the shot – oh, but that looks super cool.”

Why are we telling you this story?

Well, this is often how a ghost story is born. An ordinary image is snapped and without any surrounding information or deep experience with photography, it seems like an impressive image of a g-g-ghost. However, when you apply scientific reasoning and all of the data, you may see a much different picture than the one you’ve captured.

Hopefully, you’ve enjoyed this deep dive into how we think about our evidence review and our debunking methods – maybe you even learned some things along the way! Let us know on social media if you have any images that you think this debunking could apply to, we’d love to see your debunking in action!