The land the Academy was built on was once an orphanage built in the late 1800s. When the original building was demolished, all the remains were buried in the grounds. The current complex of buildings housed on the land were constructed in the 1960’s. At one time it was a juvenile detention facility before the client leased the building for an academy of learning for children.

PIM was contacted to investigate because several of the teachers there had experienced activity. The Academy was moving to a new location and requested the investigation be done before the lease was up. The teachers were curious to see if someone from the past was still roaming the halls. 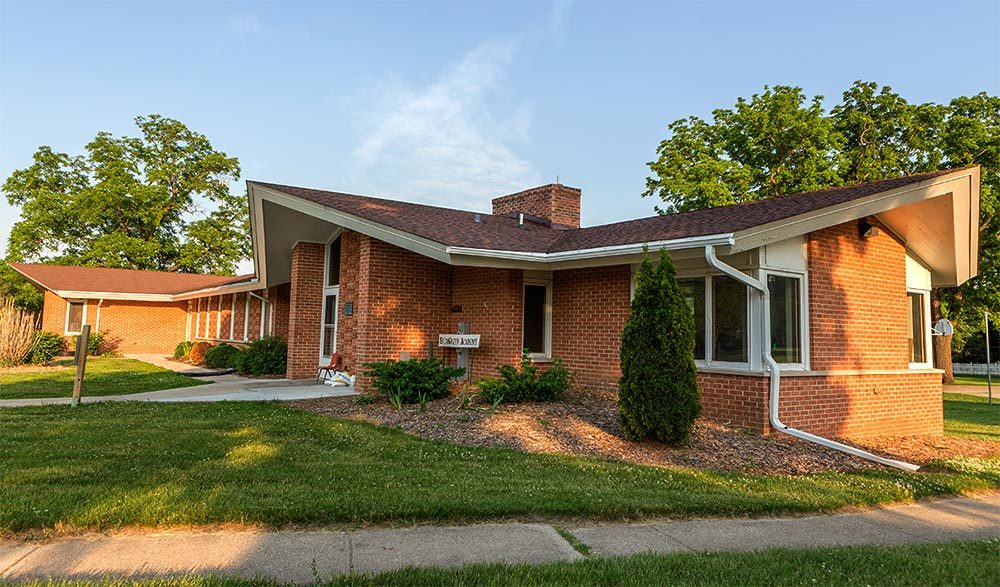 Gravy and Chris arrived at 7:00 pm and were greeted by the clients and a local historian. Brandon arrived about ten minutes prior and began taking pictures of the outside of the building. Prior to the initial walkthrough of the building with the client, PIM members started and time stamped their control recorders.

The team began placing their equipment throughout the building. A Sony HDR-SR5 camera was placed facing the stairs on the east end of the building. A trigger object bank was set up in view of the camera. The trigger objects were: a touch flashlight, a mini bottle of whiskey, a stuffed animal, a $5 bill, a toy horse, a Holy Bible, a deck of playing cards, a harmonica, a fake apple and a toy soccer ball. Trigger object banks are groups of objects, contextually relevant to an environment, that are left unattended in the hopes that something might interact with them and that interaction can be captured as evidence. 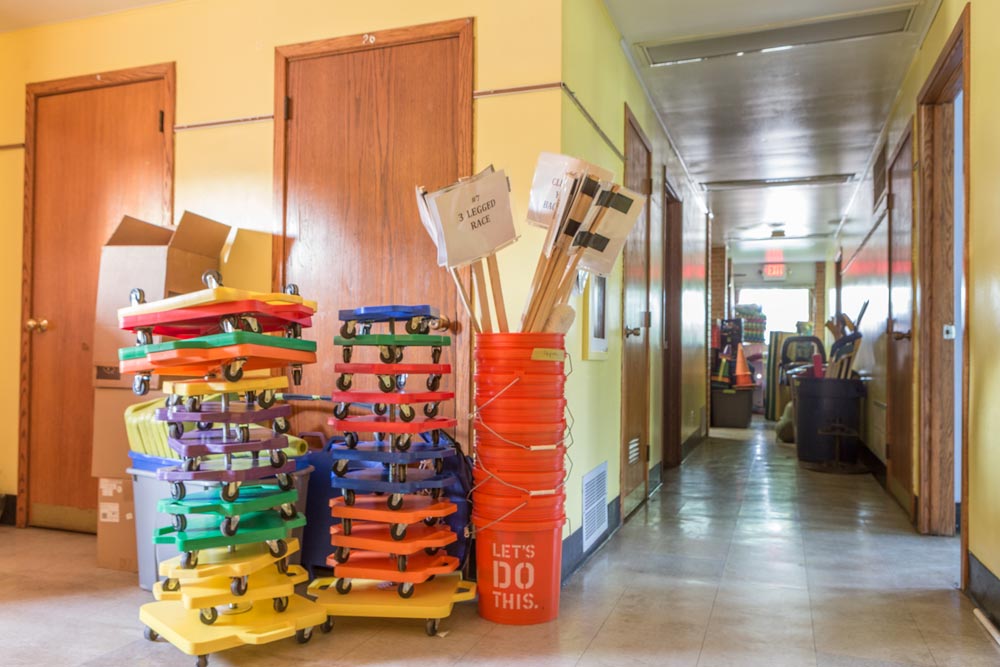 A DM X-930 Dark Matter detector was placed near the trigger object bank. The Dark Matter Detector is a device that measures EMF, temperature, barometric pressure and has a high quality audio recorder. This device also datalogs these measurements for later review should something have occurred and would need to be referenced.

The touch flashlight is activated by two contacts being touched, thus completing a circuit and turning the light on. The touch flashlight is used in lieu of a flashlight that has had the battery compartment or on/off switch manipulated to function in a way that is not intended and as a result, can create false positives. These items are placed on graph paper and base line photos are taken before and after the investigation and referenced for possible manipulation of the objects. Gravy’s homemade EM pump, which generates a localized EM field, was placed near the trigger object bank.

A Zoom H1 digital recording device was placed in the client’s 1st Floor Classroom.
A Sony HDR-CX160 full spectrum camera was placed on the west end of the building facing the main hallway of the 1st Floor. Along with the group was one client and the local historian.

It was noted the interior of the building was in disarray. The school was in the process of moving to another location. Items were scattered throughout the halls and classrooms in preparation for the move. 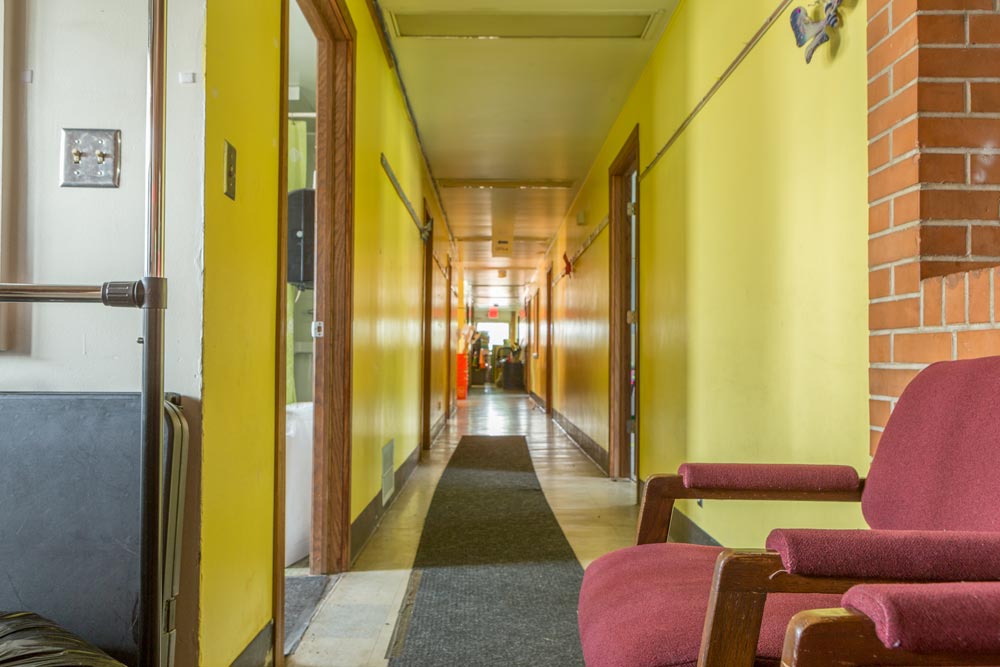 It was decided that the first EVP session of the investigation would be the main hallway at the west end near the copy machine. Gravy sat halfway down the hallway near the door to the client’s classroom. Brandon sat at the east end of the hallway. The group observed control silence before beginning an EVP session. Control silence is a method practiced at each new location in a building. It allows for members to get a baseline of noises the building could make throughout the night. It also allows for the group to tag outside noises heard in that area so as not to be mistaken as something paranormal later in the night. This also allows for the building to reset itself after members or PIM have been walking around.

At 9:08 pm, the client saw what appeared to be a shadow above the stairwell in front of her. Gravy came down to investigate the area and to see if the shadow could be replicated. It was believed the lights from a passing car could have been the source.

The Academy sits back from the main road approximately 100 yards and is placed at an angle in relation to the road. Traffic traveling in a north or south direction was unlikely the source. It was believed a car turning from another road or out of one of the many driveways along the road could have had their headlights sweep across the building and shine through some of the windows. Gravy had Chris sit in the same vicinity as the client to see if he could see the similar shadow when another car passed by. The shadow did not reoccur during the rest of the EVP session.

At 9:29 pm, both Gravy and Brandon heard a noise coming from the client’s classroom. The source of the noise could not be confirmed. This noise was not captured on any recording device.

The group decided to move on to the next location.
END TIME: 9:32 pm

The group headed to the basement for the next EVP session. Once again controlled silence was observed to determine a baseline. Despite asking many questions there was no known response. 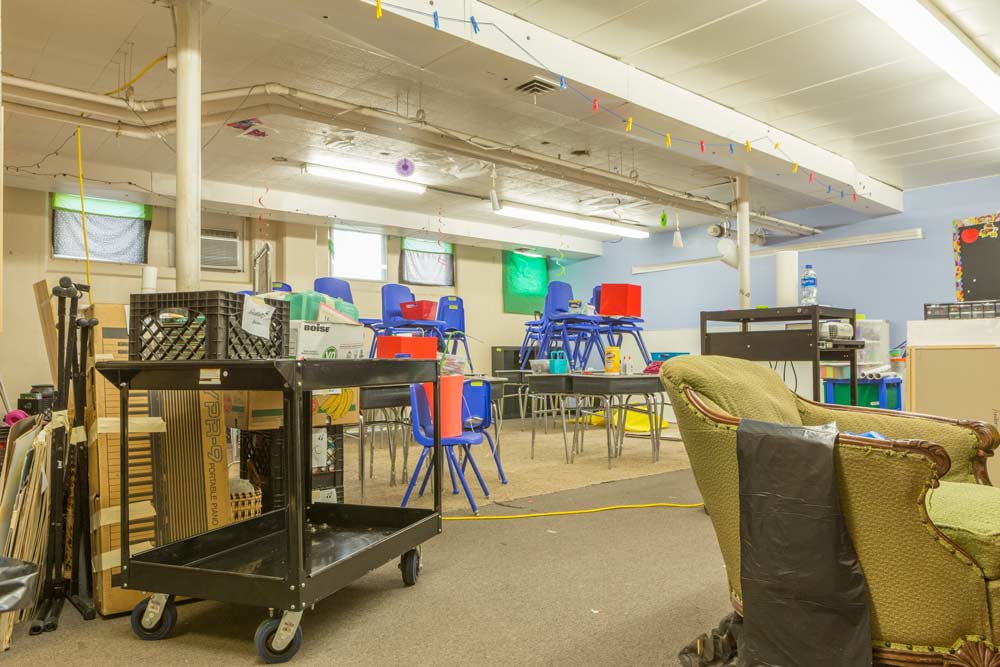 At 9:50 pm, Brandon heard a “shifting” noise next to him. The source of the noise could not be determined.

No other events occurred and the group decided to move to the next location.
END TIME: 10:00 pm

During control silence, a female “whisper” was heard on the west end of the hallway. The whisper sound was not captured on any recording device and no source of the sound could be found. It was noted there was an office off the middle of the main hallway with several electronic devices still running. There was no door to close to this room. Gravy believed the sound could have originated from within that office. The sound was not heard again throughout the investigation.

At 10:08 pm, Brandon heard what he described as a chair shifting behind him. The sound was not captured on an audio device and the chair was in a position outside of any camera shot.

At around 10:15 pm, neighbors began setting off fireworks in the neighboring area.

At 10:19 pm, Gravy heard a faint female sounding “hum” within the room. There didn’t appear to be any electronics in the room and no source of the sound could be found. The sound was not captured on any audio device.

No other events occurred during this session and the group decided to take a short break.
END TIME: 10:33 pm

The group took a short break to use the restroom and get something to drink before continuing the investigation.

Once the group separated and settled in, control silence was observed. At 10:59 pm, Brandon described hearing a faint “hum” sound to his right. This sound was not captured on audio devices and no source of the sound could be found.

At 11:08 pm, both Brandon and the historian heard a chair creak.

At 11:11 pm, Gravy heard and felt two thumps. At the time, it was unknown there was a storm moving in. As the winds were picking up, it was possible the two thumps that were heard and felt were of the building being shaken by the high winds. 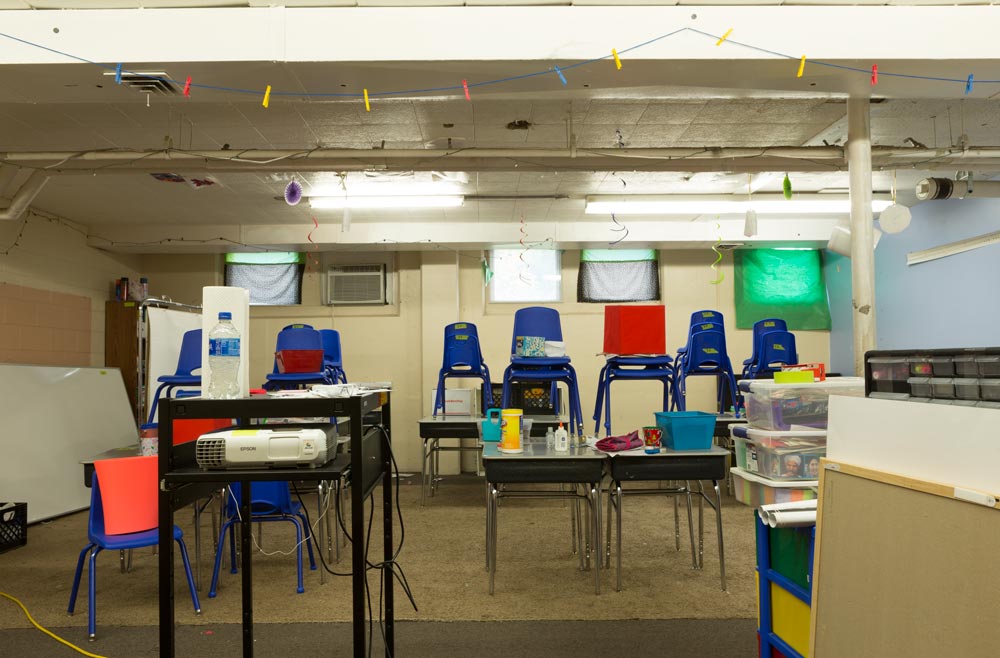 At 11:16 pm, Brandon, sitting in the door way of two rooms, heard a “shuffling sound” in the room behind him. No source of the sound could be found but previously, in the night, Gravy, sitting in the same spot, noted there was a large bug flying around the same room.
It was noted at 11:20 pm, the wind began picking up and a major thunderstorm was starting to roll in.

At 11:29 pm, Brandon described hearing another shuffling sound. Again, no source for the sound could be determined and it was not captured on an audio recorder.
The group then decided to move to the other classroom of the Basement area.
END TIME: 11:30 pm 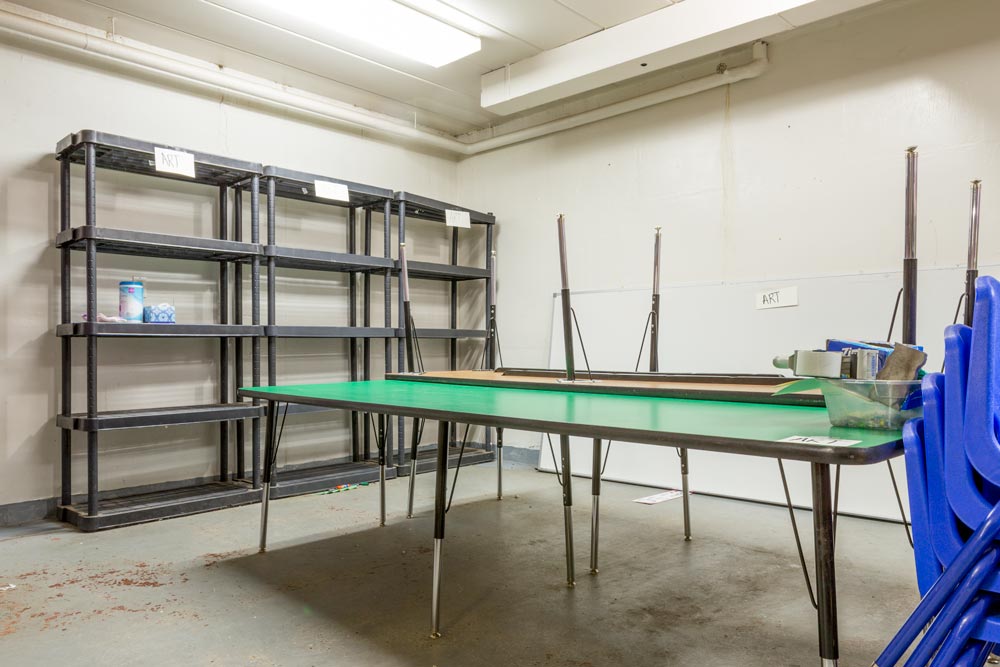 During the EVP session, the thunderstorm was in full effect with frequent lightning,loud thunder, and a torrential downpour. . At 11:37 pm, a very loud “thump” sound was heard from what was perceived to be on the 1st Floor within the building. The entire group heard this and went to the 1st Floor to investigate the source of the sound. Due to the previously mentioned state of the building for the move, it was hard to determine if anything that could have caused the large “thump” sound was out of place. The “thump” sound described was not believed to be thunder.

No other events occurred during this session and the group decided to take another break.
END TIME: 11:45 pm

The group took a short break as the storm progressed making it harder to investigate due to the sound of heavy rain and thunder.

The group decided to head back down to the Classroom 2 in the Basement.   Gravy tried using a tablet with scrolling questions on it. The thought behind this technique is that perhaps what PIM tries to communicate with cannot hear us. Gravy would type a question on the marquee, let it play once and read it out loud as the question scrolled. He would then let it scroll a few times while sitting silently allowing time for a response. This was done for several questions with no captured or experienced results.
No other events occurred and the group moved to another location.
END TIME: 12:05 am

Moving back upstairs to the Main Hall, the storm outside was still going strong. At 12:14 am, Brandon felt a thump or vibration of the building on his left side. However, this could be due to the storm and was not considered abnormal. 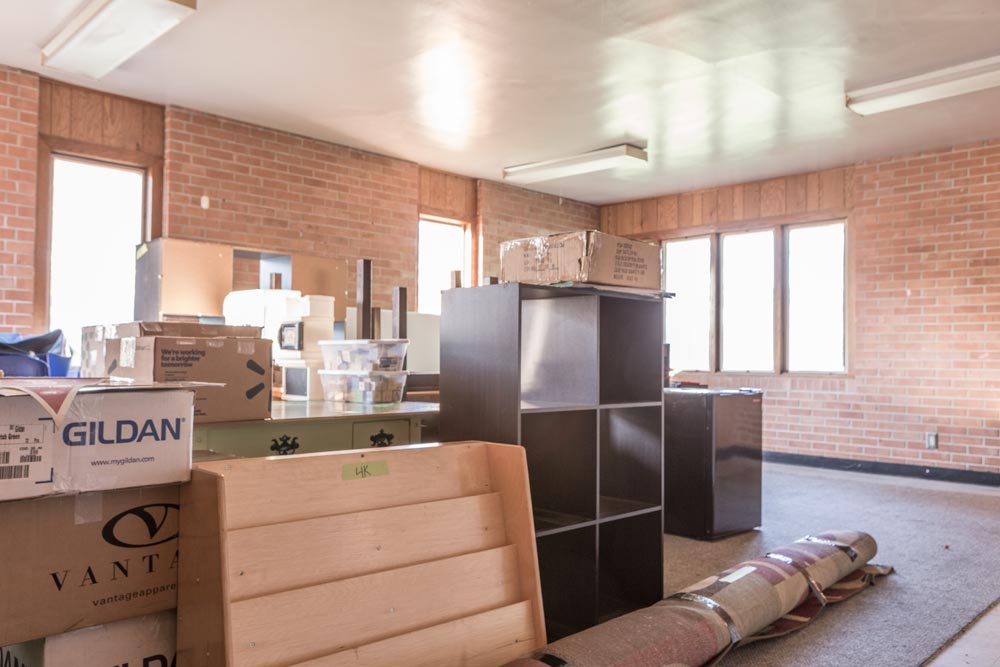 At 12:25 am, the group heard a knocking sound coming from the east side of the building. The noise was investigated but no source was determined. Again, the storm raging outside and the state of disarray of the building, it is possible that vibrations from the rain and thunder could have caused shifting of items in the building.

At 12:27 am, Gravy heard two faint knocks. No source of the sound could be determined. Gravy tried to look out an east-side window to see if something was knocking up against the building due to the wind but nothing could be seen.

At 12:31 am, Brandon heard what he described as a faint voice. The source of the sound could not be determined nor could any words be made out.

At 12:57 am, the group heard three knocks. The sources of these noises were not determined at the time. 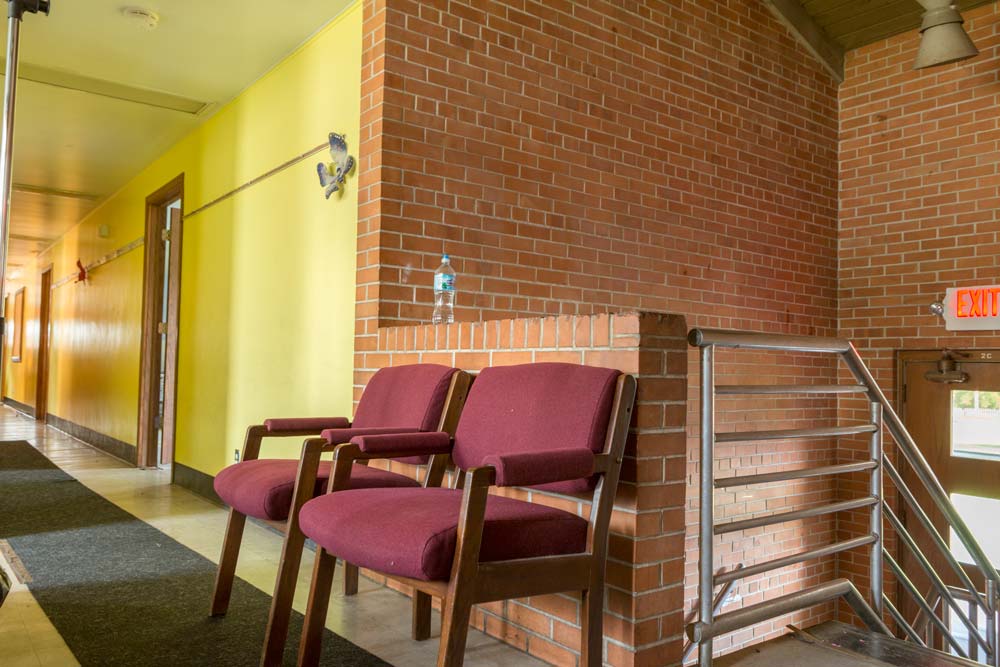