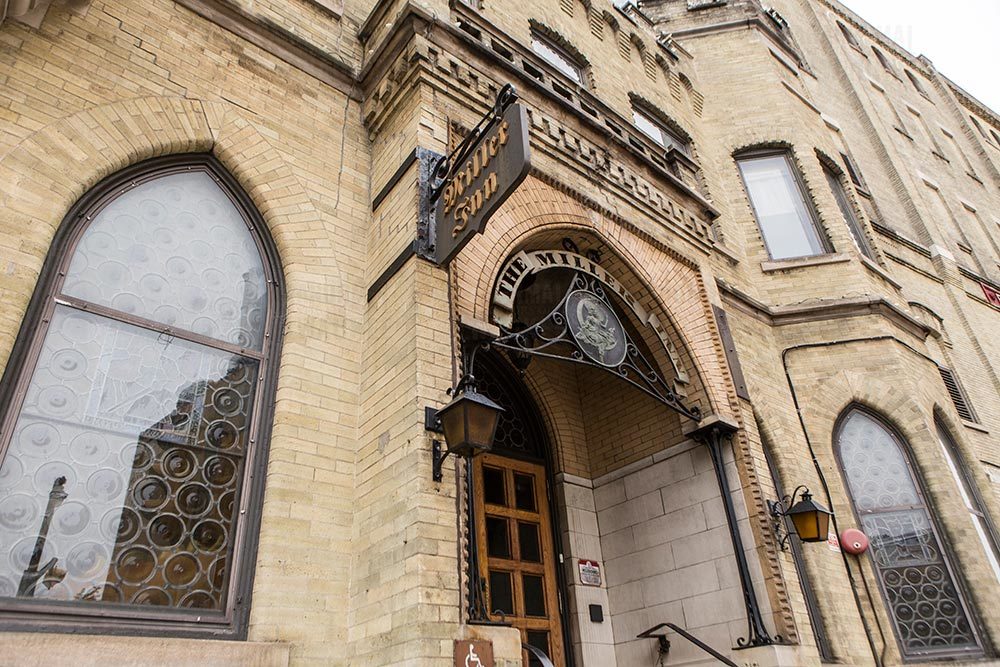 Along with control records and a UV flashlight, every PIM member is required to be equipped with an Extech RHT50 data logger which was also started. The Extech data logger measures humidity, temperature and barometric pressure at one minute intervals. This device allows us to graph these changes and compare data to other devices that might have measured or recorded an event.

PIM members began setting up equipment throughout the entire building. While equipment was being set up, started and timestamped, at 6:30 pm Marilsa took outside weather conditions. Recorded baseline readings are below. (See table). Baseline EMF (electromagnetic field) readings and indoor temperature readings were taken with a single-axis EMF MEL-8704R. A Kestrel 2500 weather station was used for outdoor weather conditions.

A trigger object bank was placed on a bench in the center of the cave. This trigger object bank consisted of the Bible, poker cards (King face up), whiskey, dice (pair of sixes), .45 caliber bullet, crucifix, baseball, rosary, harmonica, Playboy magazine and a cigarette. Trigger objects are miscellaneous items that are strategically chosen in hopes to invoke a response. Placed alongside the trigger objects were a Dark Matter Detector and a touch flashlight.

The Dark Matter Detector is a device that measures EMF, temperature, barometric pressure and has a high quality audio recorder. This device also data logs these measurements for later review should something occur and would need to be referenced.

The touch flashlight, which is activated by two contacts being touched, thus, closing a circuit and turning the light on, was also placed on the round table with the trigger objects. The touch flashlight is used in lieu of a flashlight that has had the battery compartment or on/off switch manipulated to function in a way that is not intended and as a result, can create false positives.

Any lights in the cave that couldn’t be turned off conventionally were covered up at this time using 3 mil black sheathing. Lights and windows are covered to eliminate possible light contamination from indoor and outdoor sources. The group then left the cave to begin setting up equipment in the Miller Inn.

In the High Life Room, a 4K Ghost Pro full spectrum camera and Zoom H1 were placed. The camera was placed in the southwest corner of the room facing the piano. The Zoom H1 was placed on a table in the middle of the room. Windows were covered and any lights including the “EXIT”sign were either turned off or covered.

A Sony HDR-CX550 was place on the main floor facing down the East wing seating area towards the cave entrance. The EDI+ was set on a table in view of the camera. The EDI+ data logs and graphs on a timeline several variables including: EMF, barometric pressure, humidity and ambient air temperature. It also has a vibration sensor, similar to a geophone.

In the 1st Floor Bar Room, a Go Pro and a Ghost Pro full spectrum camera were placed side by side facing the south seating area. A Laser grid was placed on the far wall facing the same area. Marilsa wanted to test the Ghost pro against the Go Pro which can only record in well-lit areas. A Zoom H1 audio recorder was placed in the middle of the room.

Once Gravy was done setting up his equipment, he began to darken rooms and cover lights that couldn’t be turned off or unplugged. Windows are also covered using the same 3 mil sheathing when blinds or shades aren’t available.

By 8:02 pm the group finished setting and time-stamping their equipment. They met in the Bar Room to discuss the night thus far. The group took a short break to consume some food and energy drinks before beginning the night’s investigation

The group spread themselves throughout the High Life Room. They observed control silence before beginning an EVP session. Control silence is the practice of sitting quietly and getting accustomed to the normal sounds of the building structure. It allows for investigators to get a baseline of normal building sounds.

An EVP (electronic voice phenomenon) session is the practice of asking questions and leaving ten seconds of silence in between, in hopes of capturing a response via an audio recording device. Rarely is a response heard by the investigator’s ears and when a response is heard by human ears it is called a disembodied voice.

During control silence, it was noted the fridge in the other room could be heard humming. Passing traffic could be easily heard and more notably when passing over the cobble stone portion of the road.  The floor creaked and popped after the investigators had walked on it and it began to settle. Lastly, fans from equipment behind the bar could also be heard. While investigating, the heat kicked on and could be heard.

No activity was reported to have occurred during this time and nothing was capture via audio or video recording devices.  The group decided to move on to the next location.

The group spread themselves throughout the Champagne Room. Again, they observed control silence before beginning an EVP session. It was noted a fan or mechanical noise of equipment from behind the bar could be heard. There was also the sound of dripping water in the sink.

At 8:56 pm, two chirping sounds were heard. Upon further investigation, no source of the sound could be determined. The sounds weren’t believed to be of bird origin, and sounded like they came from within the room. The sound was two faint to be captured on any of the audio recorders in the room however, but were still heard by multiple investigators.

No other activity occurred during this time and the team decided to head to the 1st Floor.

The group spread throughout the Bar Room and observed control silence before beginning an EVP session. It was noted the refrigerators behind the bar were humming. Traffic could be easily heard and the heating system was apparent.

At 9:15 pm, Brandon saw movement coming from the East wing sitting area. After further investigating, headlights from a passing car were projecting lights on the wall that appeared as movement especially when seeing it from the corner of the eye.

At 9:18 pm, Brandon, sitting closet to the office door that leads behind the bar, thought he heard it move a little. It was uncertain of the original position of the door and the camera in that room was by the door but was facing the opposite direction. No sound was captured by any audio device indicating the door had moved.

No other activity had occurred during this time and the team moved to the next location.

The group shifted over to the East Wing and began investigating. It was noted the same sounds from the Bar Room could be heard since the two rooms are connected.

At 9:49 pm, a mechanical clicking noise was heard toward the exit towards the caves. At 9:51 pm, there was a loud metal popping noise originating from the dumbwaiter system. The group did not deem these as paranormal events but only normal building noises.

No other activity occurred during this time and the group decided to head out to the caves.

The group situated themselves throughout the Cave and observed control silence before beginning an EVP session. It was noted the large fan could be heard at the back of the cave. This fan has been noted to be on for every investigation PIM has had in the caves.

No other activity occurred during this time. Nothing was captured via audio or video recording devices and the team decided to head back into the Bar Room to take a break.

The group took a short break in the Bar Room between 10:39 pm and 11:18 pm. The group decided to visit every location one more time before the night was over.

The group situated themselves throughout the Miller High Life Room and began an EVP session immediately since control silence was observed earlier in the investigation. No activity occurred during this time and nothing was capture via audio or video recording devices.

The group situated themselves throughout the Champagne Room and began an EVP session immediately since control silence was observed earlier in the investigation. No activity occurred during this time and nothing was capture via audio of video recording devices.

The group situated themselves throughout the Bar Room and began an EVP session immediately since control silence was observed earlier in the investigation. No other activity occurred during this time and nothing was capture via audio of video recording devices.

The group situated themselves throughout the cave and began an EVP session immediately since control silence was observed earlier in the investigation. No activity occurred during this time and nothing was capture via audio of video recording devices.

PIM broke down all their gear, stopped their control recorders and packed their equipment up before leaving the premises for the night.

PIM would like to thank MillerCoors for entrusting us with this investigation. We at PIM take our investigations very seriously and we were honored to be asked to investigate these locations. It was a fantastic experience and we hope to return someday soon to continue our research. We believe there is much to be discovered at the Miller Inn and Miller Caves!