The group, with the exception of Jarod, arrived on location at 5:50 pm to take some pre-investigation pictures of the group in front of Thornhaven Manor. Steve, the owner, arrived at 6:00 and directed PIM to drive their van to the back of the building. Steve then proceeded to give PIM a tour of the building. It was noted there were several piles of animal fecal matter in the corners of the roof on the backside of the building. Jarod arrived shortly after the tour ended and was directed to park in the back as well. The group unloaded their equipment and established base camp in the Front Room. The group went outside to take more group pictures in front of the building with Jarod before checking out the nearby barn that housed a turkey vulture. 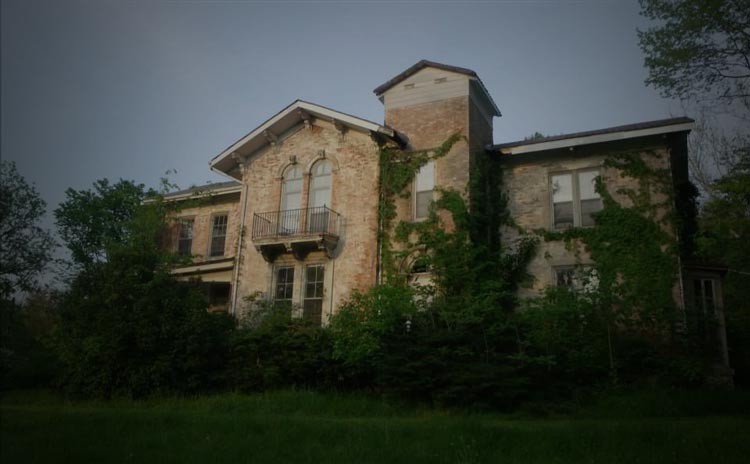 The Extech data logger measures humidity, temperature and barometric pressure at one minute intervals. This device allows us to graph these changes and compare data to other devices that might have measured or recorded an event. They are not only carried on each person but placed throughout a location as well.

PIM members began setting up equipment throughout the entire building. While equipment was being set up, started and timestamped, Missy took outside weather conditions and baseline readings (see table below). Baseline EMF (electromagnetic field) readings were taken with a Tri-field DSP-523. Indoor temperature was taken with a single axis EMF MEL-8704R. A Kestrel 3500 Weather Station was used for outdoor weather conditions. Electricity was limited to the Front Room only. Due to safety reasons, some rooms in this location were off limits and therefore measurements will not be noted below.

At 7:45 pm, Tony and Gravy began debunking a picture that was taken earlier in the day, by Gravy, where a face appeared in one of the window panes. This face in the picture was clearly an example of pareidolia, but Tony and Gravy wanted to attempt to recreate the photo to show that it was truly pareidolia and not anything paranormal.

Pareidolia is a natural event where the brain forms images from random patterns. Much like seeing shapes in the clouds or faces in smoke, pareidolia is often mistaken for paranormal evidence and is sometimes a misunderstood phenomenon in this field.

All equipment was running and time stamped by 7:53 pm. Since it was still light outside, illumination for the video cameras could not be set so the group decided to take some pictures inside and out with the selfie-stick that Noah had brought along. The group also spent some time talking to the owner, Steve, about his future plans for the building. The group re-entered the building at 8:39 pm. Upon re-entering, Gravy witnessed the tree next to the building shaking erratically. It was witnessed by the group that a large raccoon had climbed the tree to get to the roof of the 1st Floor of the building. This is where the raccoon would remain for the rest of the night. Several other critters occupied the building that weren’t seen until evidence review including mice and at least one bat. Note that a bat occupies a location that has a steady food source. This means there are insects within the building as well which could also contaminate evidence.

A Sony HDR-CX160 full spectrum camera was placed in the Front Room. A Zoom H1 audio recorder and Extech RHT50 #2 were also placed in the Front Room on a round table with several trigger objects and an EMF pump. Trigger objects are miscellaneous items that are strategically chosen in hopes to invoke a response. Trigger objects used were a toy horse, baseball, cigar, bullet, small bottle of whiskey, a Slinky, Poker cards, the Bible, a harmonica, small stuffed toy cat, a toy truck, a rosary, a crucifix and a card with Jesus on it.

A touch flashlight, which is activated by two contacts being touched, thus, closing a circuit and turning the light on, was also placed on the round table with the trigger objects. The touch flashlight is used in lieu of a flashlight that has had the battery compartment or on/off switch manipulated to function in a way that is not intended and as a result, can create false positives.

A Sony HDR-CX160 full spectrum camera was placed in the Central Room. A Zoom H1 audio recorder was placed on a table next to several trigger objects. These trigger objects consisted of a doll, toy horse, ball, small toy car, a teddy bear, the Bible, and another touch flashlight. A DM X-930 Dark Matter detector, which measures EMF, temperature and barometric pressure and includes a built in audio recorder, was also placed on the table.

A Sony DCR-DVD610 was placed in the Foyer facing the stairs. A geophone was placed halfway up the stairs. The geophone is a device that measures vibrations. It has several LED lights that light up in a linear fashion depending on the intensity of the vibrations.

A Sony HDR-CX160 full spectrum camera and a Zoom H1 audio recorder were placed in the Servant’s Quarters.

A Sony HDR-CX150 full spectrum camera and a Zoom H1 audio recorder were placed in the Master Bedroom.

A Sony DCR-SR45 and a Zoom H1 audio recorder was placed in the Children’s Bedroom.

A Sony HDR-XR200V and a Zoom H1 audio recorder were placed in the 2nd Floor Central Room.

A Polaroid Audio recorder was placed outside to act as a control recorder for sounds that might carry inside the building. 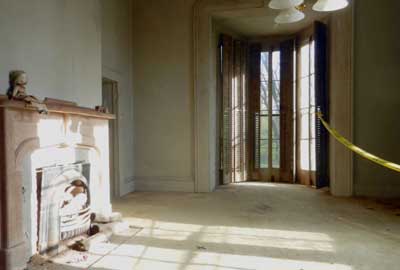 Noah, Gravy, Missy, Tony and Jarod situated themselves throughout the Central Room. They discussed the claims and history of the building before observing control silence at 9:21 pm. Control silence is the practice of sitting quietly and getting accustomed to the normal sounds of the building structure. It allows for investigators to get a baseline of normal building sounds.

At 9:25 pm they began an EVP (Electronic Voice Phenomenon) session. At 9:31 pm a thumping sound was heard which prompted Tony and Noah to run upstairs to check on the location of the raccoon that had climbed on the roof earlier in the night. It was determined the thumping sound was caused by the raccoon.

After settling down to continue the EVP session, Tony heard a shuffling sound near the couch he was sitting on at 9:34 pm. No source of the sound could be determined. At 9:38 pm, a moving or dragging sound was heard on the floor above the group. This was determined to be the raccoon again. At 9:56 pm, Noah heard four faint taps. No source was determined and this was not captured via audio recorder.

No other activity occurred during this time and the group ended the EVP session.

PIM sat in the Front Room. Gravy, Missy and Noah sat around the round table while Tony sat by the stairs to the Servant’s Quarters and Jarod by the doorway to the Central Room. Control silence was observed before beginning an EVP session at 10:05 pm.

At 10:13 pm, Noah heard a male voice and a car door slam from outside and at 10:20 pm the sound of shuffling papers was heard from the Kitchen. After further investigating, it was determined the sound came from peeling paint chips falling in that room.

No other activity occurred and the group moved on to another location in the building.

PIM sat throughout the 2nd Floor. Missy and Noah sat in the hallway near the stairwell. Gravy and Jarod sat in the Master Bedroom. Tony sat in the Kid’s Bedroom. Control silence was observed before beginning an EVP session at 10:38 pm.

At 10:40 pm, Missy heard a creaking sound come from the stairwell hallway where she was sitting. No source was found for the sound but it was decided that it could possibly be the wood adjusting back to its natural state after the group had walked on it.

At 10:58 pm, a popping noise was heard coming from the direction of the 2nd Floor Central Room. No source of the sound was determined.

PIM went back to the Front Room to take a break and have some energy drinks and food. It has been the experience of PIM that taking breaks and sitting around talking sometimes stirs up activity. It is theorized whatever might be there may not want to be ignored and will try to get the attention of whomever is there. However, it is also possible during these lax moments that members don’t properly tag their noises and thus create false positives. At 11:40 pm, by Steve’s suggestion, the group went outside for fresh air and to allow the building to be alone with the equipment running. His claim is activity seems to occur when no one is in the building as well. The group re-entered the building at 12:02 am.

PIM observed control silence before beginning an EVP session. No activity occurred during this time and the group moved to another location.

PIM situated themselves in the Servant’s Quarters where they observed control silence before beginning an EVP session. No activity occurred during this time and the investigation was called to an end.

PIM broke down all their gear, stopped their control recorders and packed their equipment up before leaving the premises for the night. On their way out, Noah contacted the owner to inform him of their departure.

The investigation at Thornhaven Manor was very interesting. This location had been featured on a prominent paranormal investigation TV show and there seemed to be quite a bit of activity that had been reported over the time since the new owner took possession of the building. PIM found that many of the rooms were off limits to investigate due to safety concerns. PIM also found that foliage near the building allowed for raccoons to occupy some of the roof space of the building. There were also bat and mice infestations in the building that even the owner was unaware of as we had inquired about this prior to our investigation. The presence of animals in and on the property severely limit the possibility of real paranormal events. The claims of sounds coming from the 2nd Floor when investigators are on the 1st Floor must be completely disregarded due to the raccoon problem. Other noise related claims must also be disregarded due to the other animal infestations that PIM uncovered.

It is very possible that there might be some legitimate activity at Thornhaven Manor, but until the property is secured against animal infestations the chance of contamination is too great to warrant a return investigation at this time. Even though the investigation did not produce any evidence of the paranormal, PIM would like the opportunity to return and investigate this location in the future in the event that the property is made more secure against animals. Thornhaven Manor is a gorgeous building with an extensive history. PIM looks forward to returning in the future to further investigate this location to further study the claims of activity. As the owner continues renovation on the building, more areas will become open for investigation which could help explain the activity reported at Thornhaven Manor.