Mansions in Milwaukee are not an uncommon sight, though it’s hard not to gaze at some of the old and beautiful buildings and imagine what deep history and enthralling stories of the past they might have to share. The history behind the Brumder Mansion holds more than many might bargain for and it’s more than happy to share it’s past with guests. 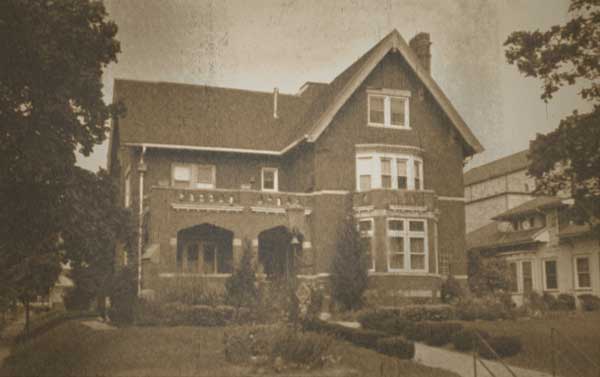 HISTORY OF THE BRUMDER MANSION

George Brumder was born in Germany in 1839, moving to Milwaukee sometime in 1857.[1] It was hard to imagine that one young man in a city full of entrepreneurial immigrants like himself, would make any sort of lasting impact, but that he did. George Brumder quickly climbed his way to the Milwaukee elite when he began publishing in German. He became one of the most affluent German Americans in the country, his publications, including the popular German newspaper the Germania.[2] These materials reached German Americans everywhere, giving them a little taste of home no matter where they were. With his growing wealth and a now adult son, George Brumder Jr., Mr. Brumder decided to build his son his own home in 1910, what would become known as the Brumder Mansion.[3] 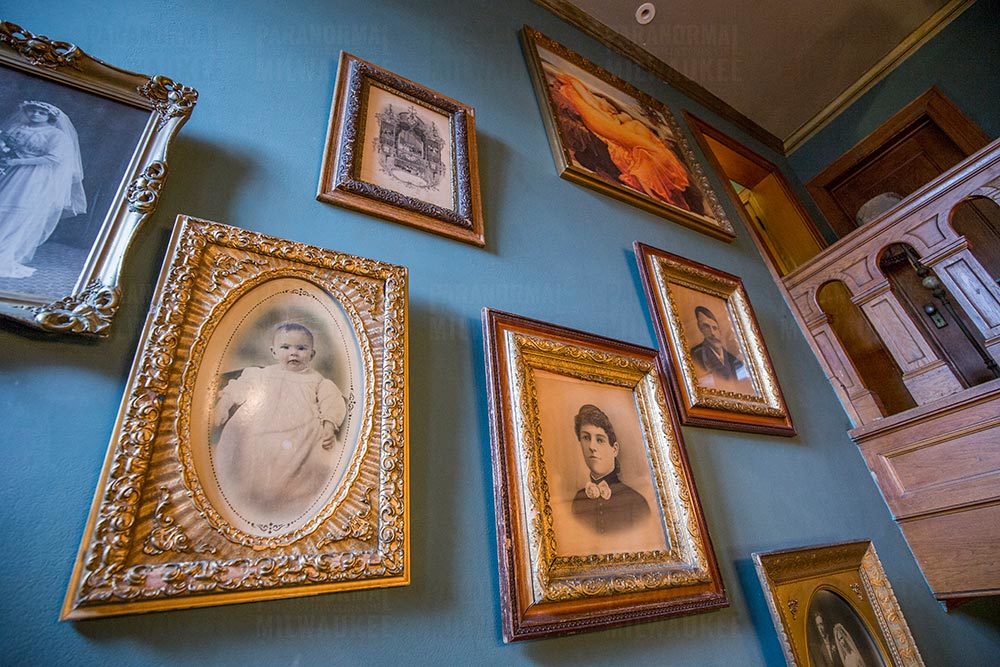 The Brumder Mansion was a stunning example of a mesh between arts and crafts, gothic, and Victorian architecture with renowned architect Herman Schnetzky behind it all.[4] The red brick home had three stories and nearly 8,000 square feet, giving George Jr. and his family plenty of space to grow over the years.[5] One of the more notable features was the inclusion of a ballroom with a separate entrance on the basement floor, in contrast to the popular tradition of the time, which usually placed them on one of the upper floors.[6] When it was finally finished the grand total was an astounding $25,000. Unfortunately, Mr. Brumder died in May of 1910 and was unable to see the completion of the mansion he had commissioned for his son.[7] 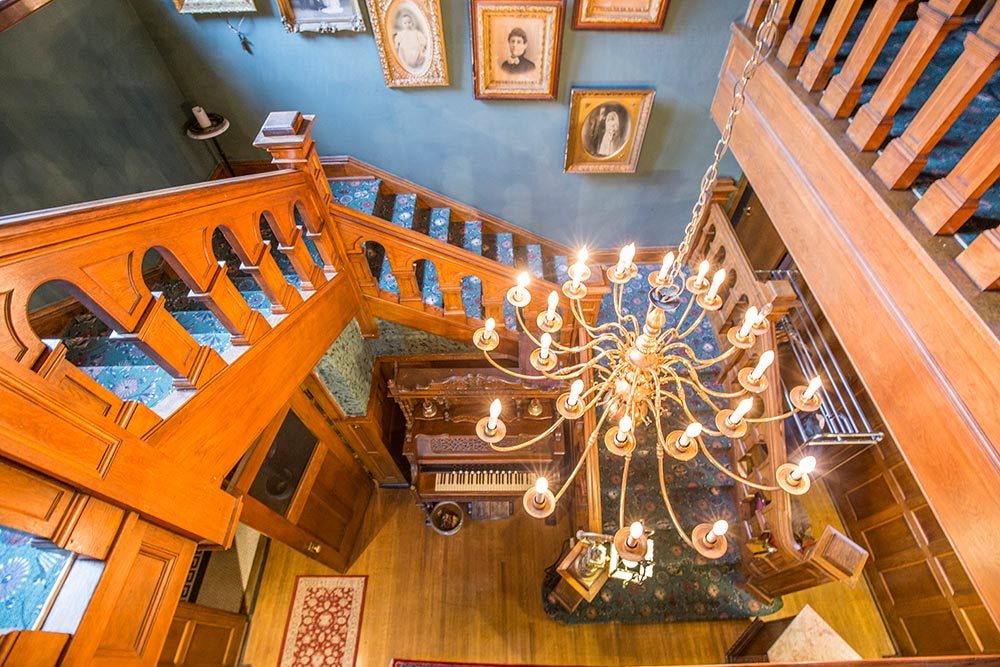 The Brumder family lived in their new home for around a decade before selling it after the death of George Brumder Jr.’s wife.[8] It was in 1927 that Sam Pick and his brother Ed purchased the home from the family. Sam Pick, his wife, Laura Miller, and their son, Robert lived there together.[9] If Sam Pick were any other average joe this change of ownership would have been uneventful, but the Pick brothers had a reputation that preceded them. The brothers were both alleged to have ties to Al Capone and were involved in the illegal trade of alcohol during prohibition years.[10] Sam was already the owner of a nightclub called Club Madrid that was known for its shady clientele to the point where some believed Capone had him open the club as an outlet for his illegal booze, though the FBI’s reports claim that there is no evidence Club Madrid was ever a mafia-run business.[11] The Brumder Mansion, however, had an even dubious reputation. The strangely placed ballroom within the basement of the home with it’s separate entrance made the perfect place for a speakeasy.[12] 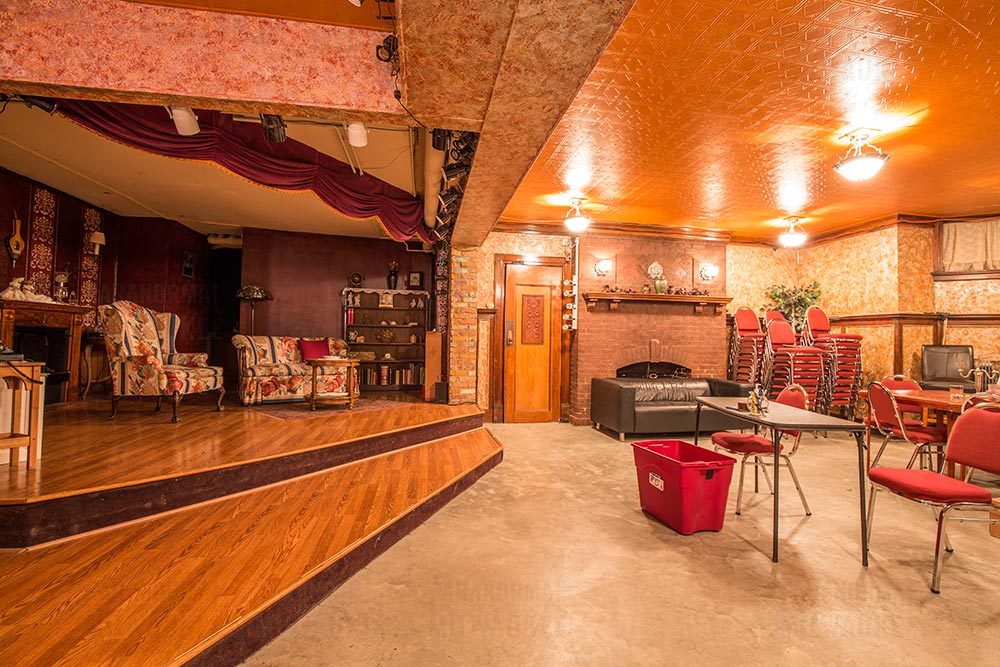 The Brumder Mansion basement speakeasy was alleged to have also been home to gambling and prostitution.[13] Some say that the four young women listed as “roomers” living with the Pick family in the mansion may have been the prostitutes that worked at the speakeasy, although it isn’t known for sure.[14] The Picks left the home around 1932, just before prohibition was repealed and the house remained vacant for a short time.[15] Briefly it is said that a group of lawyers occupied the house, but soon it was bought by a couple who used it as a boarding house for a nearby company, Allis-Chalmers.[16]

In the mid 1940s the home was again purchased, this time by Our Savior’s Lutheran Church. With the expansion of the church they needed more space to spread out and the Brumder Mansion became a living quarters for the pastors. Over the years it also served as a place for offices, meeting rooms, daycare, a chapel, and youth center.[17] In 1997 the Brumder was bought by Carol and Robert Hirschi who restored the home to its original beauty and opened up the bed and breakfast and basement theater that remain there today, though they are no longer the current owners. The current owners had stayed at the bed and breakfast in 2007 when visiting from California and purchased it in 2008 when learning that the owners were thinking about selling. To this day the Brumder is still in operation as a historic bed and breakfast with a theater that still hosts many performances.[18]

HAUNTS OF THE BRUMDER MANSION

With an illustrious history like the Brumder’s there are bound to be a few ghost stories floating around the place. In fact, the Brumder Mansion is home to at least three known spirits that manifest around the various rooms of the home, and some argue more. Guests and investigators alike have had strange experiences within the bed and breakfast, many of the stories even coming from the previous owner of the B&B. While Mrs. Hirschi owned the Brumder Mansion she had various experiences with a female entity in the Gold Suite. One night while staying in the Gold Suite with her dog she heard a voice shout at her telling her to get the dog out of the bed. She also has said that the mirror in the bathroom of the same room lifted off of its hook and was thrown into the bathtub when no one was around, shattering it [19] and once discovered droplets of fresh blood in the tub basin when no one was staying in the room. Frightened, she thought there may be a body upstairs and that the blood could be coming from the ceiling, but there was no explanation.[20] 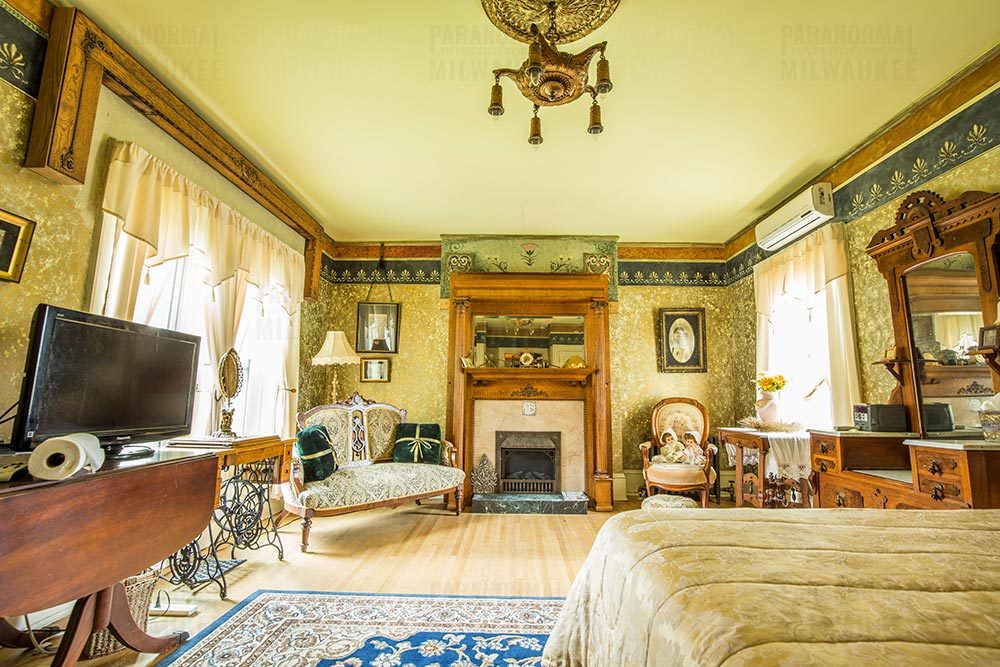 Many guests and paranormal investigators have also had strange experiences in the Gold Suite. Those who stay in the room have reported having intense dreams, often of a stern woman. When guests stayed there with their dogs the woman in their dreams would threaten the dogs if they did not remove them from the room immediately.[21] A psychic whom once visited the B&B while Hirschi operated it reported being visited by the spirit of a woman who called herself Aunt Pussy, her real name being Susan. The spirit communicated to the psychic that she was not a fan of the fancy new decor and that she did not want any dogs to stay in the Gold Suite. It is said that after dogs were no longer allowed in the room the spirit remained calmer, though Hirschi sometimes still had issues with the decor.[22] 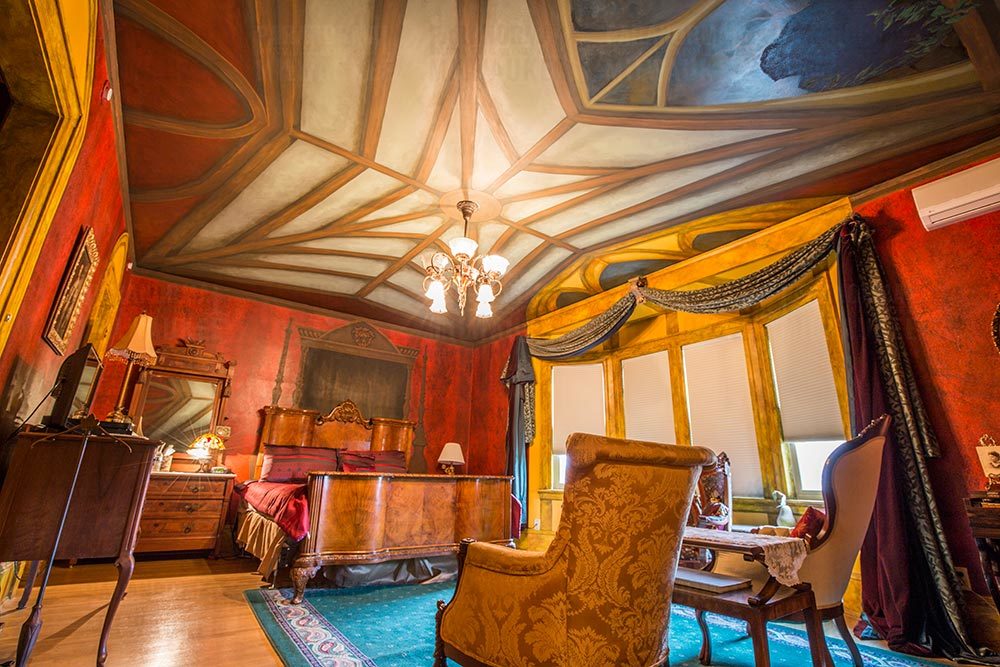 Another hot spot in the Brumder Mansion is within George’s Suite, named after George Brumder Jr. In fact, many believe that George may be the male presence that haunts the room and nearby area. Strange breezes can be felt in the room and objects go missing from time to time, only to reappear where they had originally been left.[23] During an investigation in the room one paranormal research team felt inexplicably cold and heard footsteps and humming from outside of the door.[24] Guests and investigators have seen shadows in the room before and during another investigation a member of the team was plagued by mysterious headaches when in George’s Suite that would dissipate as soon as she left the room. Though it could have been interference from the equipment in the room causing her head to hurt the exact cause is unknown.[25] 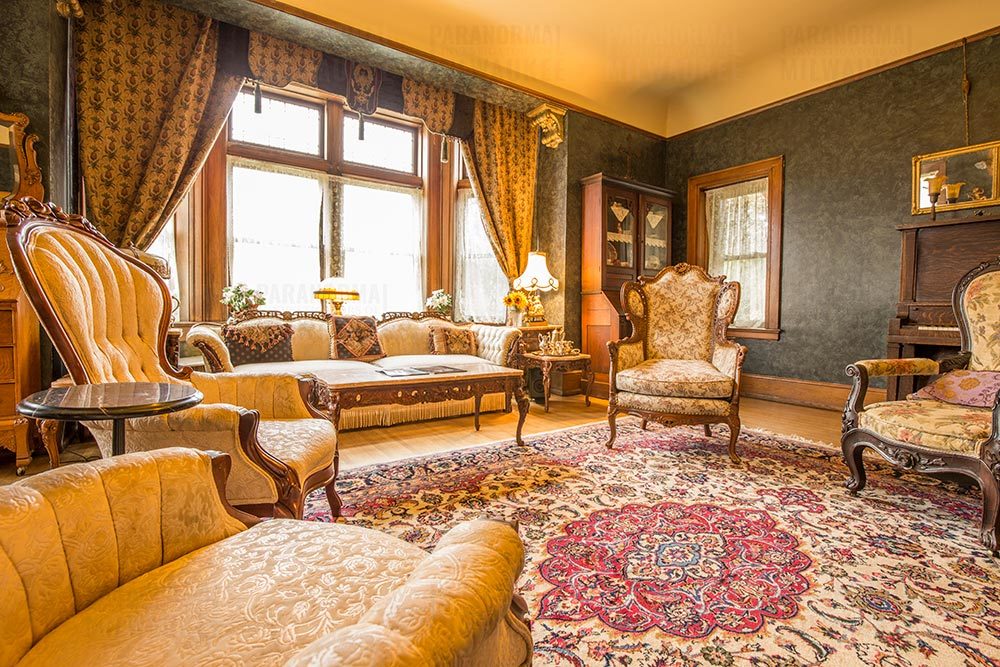 The third presence at the Brumder is the spirit of what is believed to be a young child, though its unknown if they are male or female. It is known to haunt the third floor mostly, hanging around Marion’s Suite. Sometimes guests have reported the same presence on the second floor near Emma’s Room as well.[26] During an investigation one team caught an EVP in Marion’s Suite of what sounded like a young girl saying, “Don’t leave, help me!” Sometimes guests have reported the feeling of someone jumping on the bed, or a playful and mischievous presence haunting the room.[27] In Emma’s Room a marriage certificate once fell off of the wall, the hook and wire still in perfect shape when the owner found the frame on the floor. The glass in the frame had shattered from the fall.[28] This presence may have also been responsible for times guests have been locked out of the mansion, or when the doorbell refused to play the tune it was set to no matter which it was.[29]

Though many guests and investigators alike have had interesting experiences at the Brumder Mansion almost everyone who has stayed there agrees that the spirits that haunt the Brumder aren’t malicious. Perhaps picky and a bit mischievous but most of all they are curious. From Aunt Pussy and her distaste of the fancy decor to the youngest presence and their love of tricks the Brumder is filled with stories of the paranormal and unexplained. It seems that these stories will continue to remain so long as the residents do.