Noah, Gravy, and John arrived at 6:55 pm on Saturday, August 4th. They were met by the Museum Curator, who invited the group inside. The team began bringing their equipment inside and setting up the equipment. John documented outside weather conditions using a Kestrel 3000 weather station. 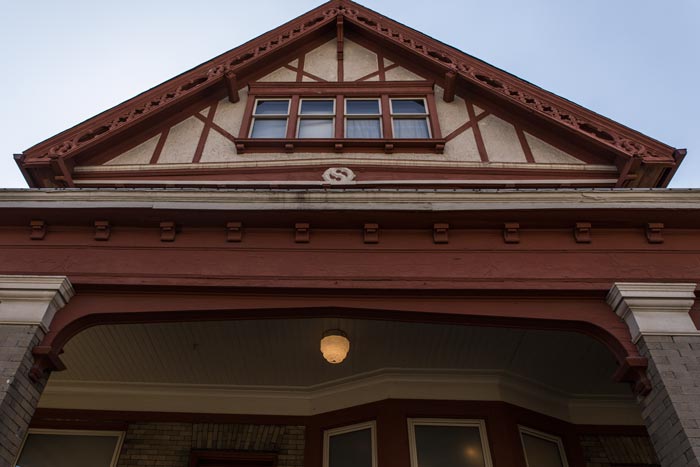 Nate from Channel 58 news was a guest on this investigation.

At 7:30 pm, Nate arrived at the museum. Nate was participating in the investigation with PIM as preparation for a news story he was doing about paranormal investigating. The museum curator left the building shortly after Nate arrived.

A Sony HDR-CX160 full spectrum camcorder was placed on the 1st Floor. In addition, a Zoom H1 audio recorder was placed in the 1st Floor Grocery Store along with a single-axis EMF Mel-8704R VIBE. The Zoom H1 audio recorder is used by PIM because of its high quality and sensitive stereo X/Y mic configuration that captures high quality audio. A touch flashlight, a GQ GMC-300 datalogging Geiger counter, which measures beta and gamma radiation and an Extech RHT50, which datalogs temperature, humidity, and barometric pressure were also placed in the 1st Floor General Store. The touch flashlight is used in lieu of a flashlight that has had the battery compartment or on/off switch manipulated to function in a way that was unintended. The touch flashlight is activated by two contacts being touched, thereby closing a circuit and turning the light on.

A Sony HDR-CX160 full spectrum camcorder was placed on the 3rd Floor facing down the hallway along with a Zoom H1 audio recorder.

A Zoom H1 audio recorder was placed in the Basement of the museum.

Gravy and Noah proceeded to turn off lights on the 3rd Floor as the other lights in the museum had been turned off at the circuit breaker. PIM uses cameras that are sensitive to the infrared spectrum of light which makes it possible to record in the dark. It is easy to create a shadow with something as simple as a car driving by or someone walking down the street in front of a window. These are things that can cause a person to mistakenly believe they saw a person or shadow figure. This is the reason PIM takes great care to eliminate as much light as possible.

Control recorders are not only used as another recording device but also to discriminate the sound contamination that an investigator might create during an investigation.

The Basement is split into two sides, the right and left. The two sides do not connect and are very long hallways that are used mostly for storage. The group began the investigation in the Right Side of the Basement, starting with several minutes of controlled silence. Controlled science is the practice of everyone remaining silent for several minutes to get used to the normal building and outside noises to establish a baseline. Gravy was positioned in the Liquor Room, John, the Boiler Room, Noah, the Beer and Transport Room, and Nate in the Work Room. The environment was mostly quiet, with some sounds being heard from the street and pipe noises in the Work Room.

At 9:39 pm, a sound was heard of an object possibly shifting.

At 9:46 pm, the group moved to the Left Side of the Basement. During controlled silence, an electric hum was heard and some sounds from the street.

At 9:57 pm, Noah heard what sounded like something moving behind him. The group was unable to determine the cause.

At 10:05 pm, Noah and Gravy heard two taps in front of Noah. These sounds may have been related to a pipe that was in contact with a shelf. The pipe appeared to run along the wall to the outside. An outside source may have caused vibrations to transfer from the pipe to the shelf.

No other events occurred during this session and the team headed to the 1st Floor.

The group took a short break.

John sat outside the Gift Store, Noah in the General Store, Gravy in the Depot Room Hallway and Nate in the Pharmacy. Noah asked that everyone observe five minutes of control silence. Everyone was able to hear sounds coming from outside, including music from an outdoor concert.

At 11:21 pm, Nate indicated he was having a personal experience which consisted of the hair on his arm and leg standing up. Noah went to Nate’s location and was unable to detect any change in environmental conditions.

The group spread out on the 2nd Floor. After several minutes of controlled silence, it was determined that outside noises could be heard. An EVP session ensued; however, no responses were heard. The group then took a short break.

The group spread out on the 3rd floor and after five minutes of controlled silence, conducted an EVP session. During this time, nothing out of the ordinary occurred.

The equipment was put away and the group then left the building.

PIM would like to thank Steve and the Chudnow Museum of Yesteryear for allowing PIM the opportunity to investigate this wonderful historic location. We look forward to working with you again very soon.