After the tour was over the Museum Curator showed Noah how to turn off lights and began to cover motion sensors which controlled the lights in the museum so they would not go on during the investigation. The Curator was very helpful in doing what was necessary to make the museum as dark as possible. PIM uses cameras that are sensitive to the infrared spectrum of light which makes it possible to record in the dark. It is easy to create a shadow with something as simple as a car driving by or someone walking down the street in front of a window. These are things that can mislead someone into thinking they saw a person or shadow figure. That is why PIM takes great care to eliminate as much light as possible.

At 4:45 pm the Museum Curator left for the night. Missy, Noah and Cassie then did another walkthrough of the museum deciding where to place equipment. Also, baseline EMF (electromagnetic field) readings were taken with a TriField 100XE EMF Detector and indoor temperature was taken with a Single-Axis EMF Mel-8704R.

Once this was done, Noah began instructing Missy and Cassie as to where their equipment would be placed. Several high definition camcorders were placed in selected areas of the museum. A Sony HDR-CX160 full spectrum camcorder was placed in the 1st Floor Drug Store. In addition, a Zoom H1 audio recorder was placed in the 1st Floor General Store. The Zoom H1 audio recorder is used by PIM because of its high quality and sensitive stereo X/Y mic configuration that captures high quality audio. A GQ GMC-300 datalogging Geiger counter, which measures beta and gamma radiation and an Extech RHT50, which datalogs temperature, humidity, and barometric pressure were also placed in the 1st Floor General Store.

On the 2nd Floor in the Toy Room facing the Theatre, a Sony HDR-CX160 full spectrum camcorder was placed. Another Sony HDR-CX160 full spectrum camcorder was placed on the opposite side of the 2nd Floor shooting down the hallway towards the Dr. Joe Eisenberg Clinic. A GQ GMC-320 datalogging Geiger counter was placed in the Dr. Joe Eisenberg Clinic along with another Extech RHT50 and a geophone. This Geiger counter datalogger does everything the 300 version does but has a built in gyroscope and records temperature.

The Chudnow Museum’s 3rd floor is generally restricted from visitors. PIM was granted special permission to access this area.

Once the equipment was placed illumination was set as best it could, since it was still light out and windows couldn’t be covered. All equipment was started and time stamped. Time stamps, from an atomic watch, are used as a point of reference and make cross referencing easier during evidence review.

It was decided to have the first EVP (electronic voice phenomenon) session on the 2nd Floor since camera illumination needed to be checked there. Noah took a moment to make sure both camcorders were well illuminated. Then Missy, Noah and Cassie each took a seat in the Theater. 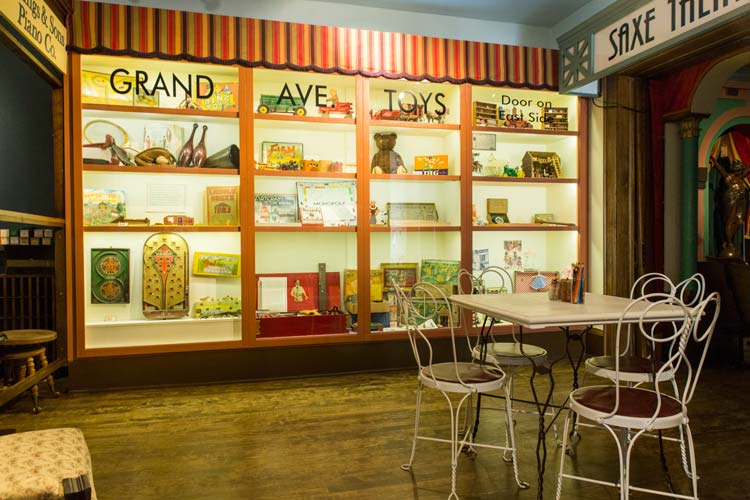 At 8:47 pm Noah called for five minutes of controlled silence. Controlled silence is a common practice used to tag or document the normal sounds of the building and its surrounding environmental noises. Some street noises, cars, people, etc. could be heard on the 2nd Floor but the house itself is very quiet. Noah turned off the air conditioning unit before leaving for dinner so mechanical noises inside would not be an issue.

At 9:01 pm the first EVP session of the night began. Although many questions and attempts were made to communicate nothing out the ordinary was heard and the group decided to end the session and head to the 1st Floor.

At 9:17 pm Gravy contacted Noah that he had arrived to join the investigation.

Gravy took this time to set up his HDR-CX160 full spectrum camcorder on the 1st Floor near the entrance. He also set up a Zoom H1 recorder in the Basement near its entrance on the right side and a Zoom H1 recorder on the 2nd Floor in the Schlitz Room. He also started and time stamped his own H1 control recorder and Extech RHT50 datalogger. Now that Gravy was set and ready to start they decided to begin on the 1st Floor for the second EVP session of the night.

Cassie sat in the Political Room, Missy in the Ice Cream Shop, Gravy in the General Store, and Noah in the Gift Shop. Noah asked that everyone observe five minutes of control silence. Everyone was able to hear traffic outside and the refrigerator that was in the Ice Cream Shop.

At 10:01 pm Noah began an EVP session. He asked “How many people are here?” Noah then said that he thought he heard a voice. At 10:04 pm Missy asked “If you worked here what kind of work did you do?” Noah thought he heard a voice again but it could have been coming from outside. Noah then asked the question “How many fingers am I holding up?” He was holding up four fingers but no response was heard.

At 10:10 pm it was decided to end this EVP session and move to the 3rd Floor.

The team arrived on the 3rd Floor at 10:19 pm and quickly spread themselves throughout the various rooms. Missy was in the Vending Machine Room, Cassie in the West Office, Noah in a storage room, and Gravy in the East Office. Again they observed silence and noticed that the traffic noise is loudest on the 3rd Floor. There also seems to be a blower or fan noise coming from somewhere neighboring building. 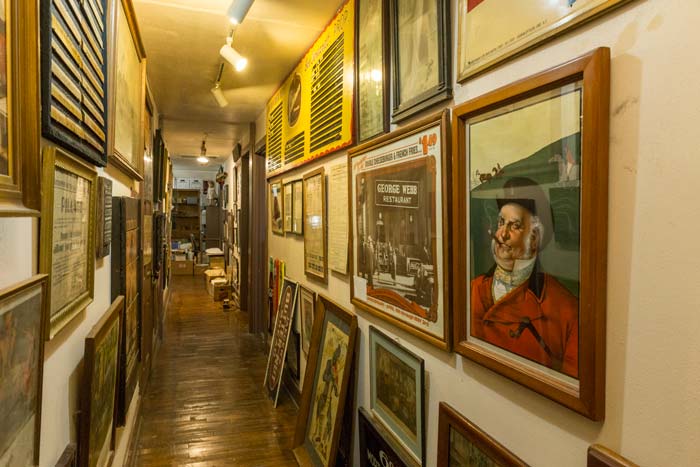 At 10:24 pm they began an EVP session. At 10:39 pm Missy heard shifting coming from her right which is the direction of the room that Noah was seated in. He did not hear the noise. Shortly after, Gravy asked for someone to knock twice so that everyone could hear it. Missy thought she heard two faint knocks but they were not captured on any recording devices.

At 10:40 pm Missy heard movement again coming from in her room. Noah came into the room she was sitting in to investigate. Noah then discovered that there was tissue paper that was lining the shelves. It was hanging over one shelf and a curtain was moving slightly caused by air currents in the house and brushing against the tissue paper. Every time the wind would blow the tissue paper would quietly make a crinkle sound. After the curtain was adjusted Missy did not hear the noise again.

Once the team arrived on the 2nd Floor they spread themselves throughout the various displays. Gravy sat near the Dr. Joe Eisenberg Clinic, Cassie chose a seat in the Theatre, Missy sat outside of the Barber Shop, and Noah sat in the hallway in front of the Speak Easy. Almost immediately after everyone got settled, at 10:57 pm, Noah heard what he described was a metal on metal sound coming from the direction of the Dr. Joe Eisenberg Clinic. Gravy, who was sitting there, did not hear the sound. It is unknown as to what that was.

At 10:59 pm the next EVP session began. At 11:03 pm Noah heard possible water dripping. There is a bathroom on the 2nd Floor and the water could have been dripping in there. At 11:08 pm everyone heard a pop or a chair moving sound in the Toy Room although nothing seemed to be out of place. At 11:10 pm, Missy went into the Speak Easy to try and entice some activity but nothing unusual happened. At 11:20 pm they ended this EVP session and took a short break on the 1st Floor.

After the break, the group decided to continue the investigation in the Basement.

At 11:59 the team arrived in the Basement. The Basement is split into two sides, the right and left. The two sides do not connect and are very long hallways that are used mostly for storage. The team decided to start on the right side. They each chose a place to sit and began controlled silence. Very quiet street noise could be heard but not much else.

At 12:05 am they began an EVP session. Noah began by introducing everyone and asking that if someone was in the Basement that they try and communicate in any way they can. At 12:11 am, Noah thought he heard a knock and a click in front of him in the workshop. It is unknown what made the sound.

At 12:18 am they decided to move to the Left Side of the Basement to continue the investigation.

At 12:23 am everyone was again settled down the long narrow hallway of the Left Side of the Basement. At 12:25 am they began another EVP session. Many questions were asked but nothing out of the ordinary was heard or seen. The team decided to try one last EVP session of the night on the 1st Floor. 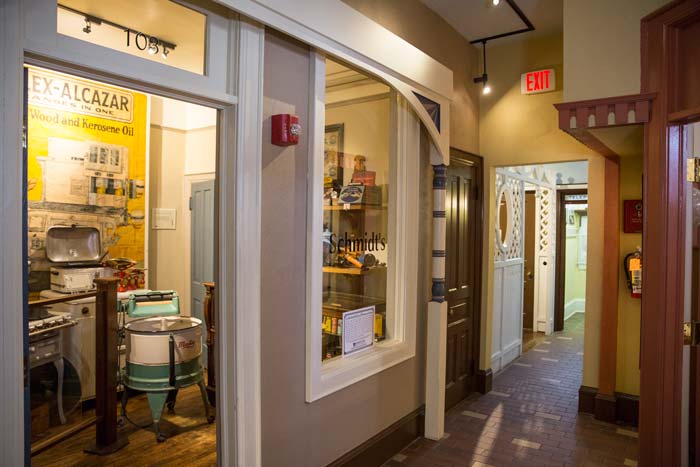 At 12:48 am everyone was settled around the 1st Floor. They began by stressing that this would be the last opportunity for the night for someone to communicate and that nobody was here to make them leave or cause harm. Many questions were asked about Mr. Chudnow and Dr. Eisenberg and their associations with the Chudnow Museum building. Gravy also started a game asking questions about the U.S. Presidents. There was no activity so it was decided to end the investigation for the evening at 1:11 am.

PIM would like to thank Steve and the Chudnow Museum of Yesteryear for allowing PIM the opportunity to investigate this wonderful historic location. We look forward to working with you again very soon.