The PIM team, Noah, Gray, Brandon, Amber, Marilsa and Tom, arrived to Farrar School at 2:51 pm. Jim, the owner, greeted the team and apologized that his wife Nancy could not join us. He suggested the best place to park, and warned the team that the school was becoming more popular with tourists visiting at all times of the night but that the school was secure. 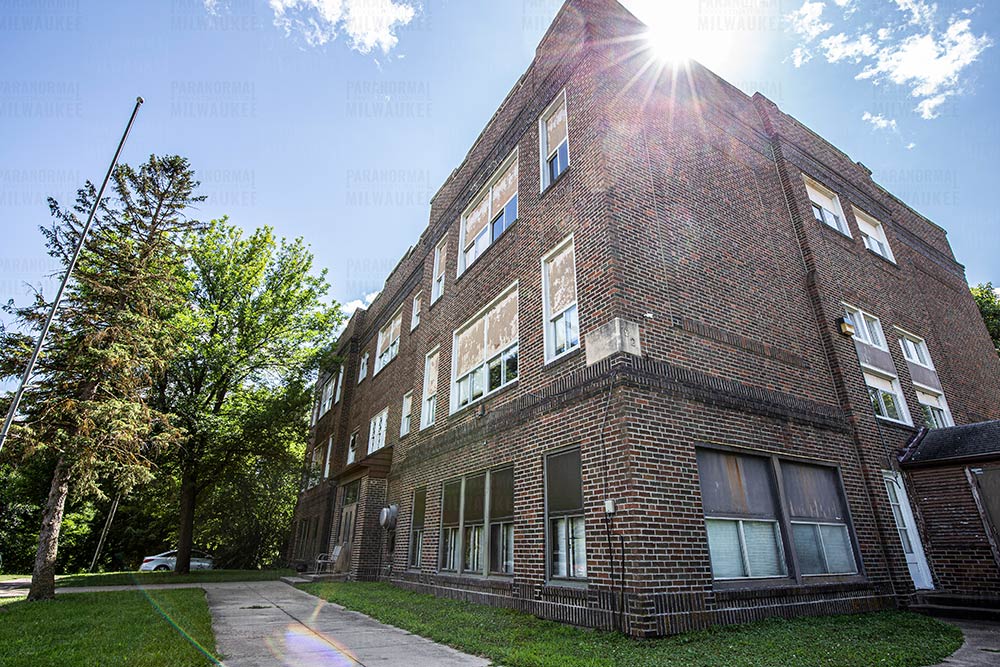 By 3:00 pm PIM signed the consent forms and began to unload the equipment to the 1st Floor Hallway, near the private quarters of Jim and Nancy. Personal items were taken to the break room, Room 101, the only room with air conditioning.

At 4:15 pm, Jim retired to his private quarters with his small dog on the 1st Floor and everyone in the team except for Brandon and Amber begin assembling the equipment for the investigation.

At 4:34 pm, Brandon and Amber collected baseline environmental data using a Kestrel 3500 weather station and a MEL-8704R SDD, a single-axis electromagnetic field (EMF) detector. In addition, they took photographs of the site while the others assembled and placed cameras, infrared lights, audio, and trigger objects throughout the building. The baseline readings are in the table below.

Each PIM member carries a Zoom H1 digital audio recorder (control recorder). These control recorders are placed in a Faraday cage to block radio signals from interfering with their audio recorders, thus preventing false electronic voice phenomena (EVP). Along with control recorders, every PIM member is equipped with an Extech RHT50 data logger. The Extech data logger measures humidity, temperature and barometric pressure at one-minute intervals. This device allows us to graph these changes and compare data to other devices that might have measured or recorded an event. In addition, our standard procedure is the use of time stamps from a designated atomic watch. This is an essential procedure for the purpose of conducting cross referencing during evidence review. 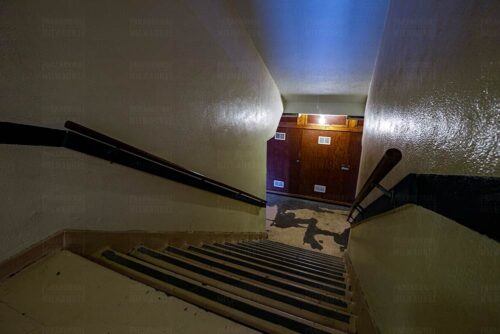 The Boiler Room equipment consisted of a Sony HDR-CX160 Full Spectrum camera, a Zoom H1 audio recorder in a Faraday Cage, an Extech RHT50 data logger and a touch flashlight. In addition, a trigger object bank was placed in the middle of the room on a table that consisted of: a bullet, cigar, cigarette, deck of cards (Joker facing up), Playboy magazine (open to a cartoon), whiskey, Bible, crucifix, magnetic levitator, harmonica, holy water, troll doll, and PIM metal platter (with letters and numbers etched around its edge and a levitation pointer placed in a neutral position).

A Sony HDR-CX440 Full Spectrum camera was placed on the 2nd Floor Hallway at the south end, facing the north stairway.

A Sony HDR-CX160 Full Spectrum camera and a Zoom H1 audio recorder in a Faraday Cage were placed at the south end of the hallway of the 3rd Floor, facing the north stairway, matching the setup on the 2nd Floor.

A Zoom H1 audio recorder in a Faraday Cage was placed in the Principal’s Office on the 3rd Floor on top of the desk. 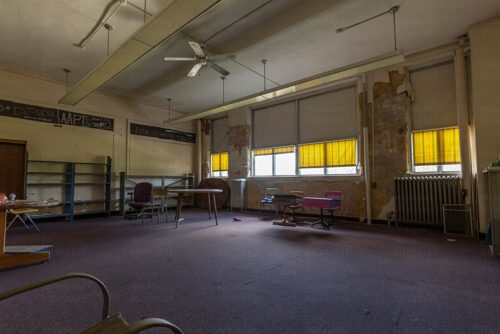 At 6:48 pm, the team finished setting up the equipment, turning it on and time stamping it. Some of the stairway windows were darkened with black plastic and the anti-rodent ultrasound generators in the Boiler Room were unplugged. The team gathered at 7:00 pm to have dinner.

At 9:00 pm, PIM turned off the building lights and left for the 3rd Floor to start the investigation. At 9:04 pm everyone settled in for an EVP (Electronic Voice Phenomenon) session in the Auditorium. An EVP session is conducted by asking questions but leaving a minimum of 10 seconds between each question in the event a response is captured on a nearby device. Investigators speak in full voice and tag any abnormal noises they might make or hear during an investigation. Common noises that investigators tag are stomach growls, accidental whispering and shifting or moving noises they might create that could be mistaken as something paranormal during the review of the data. 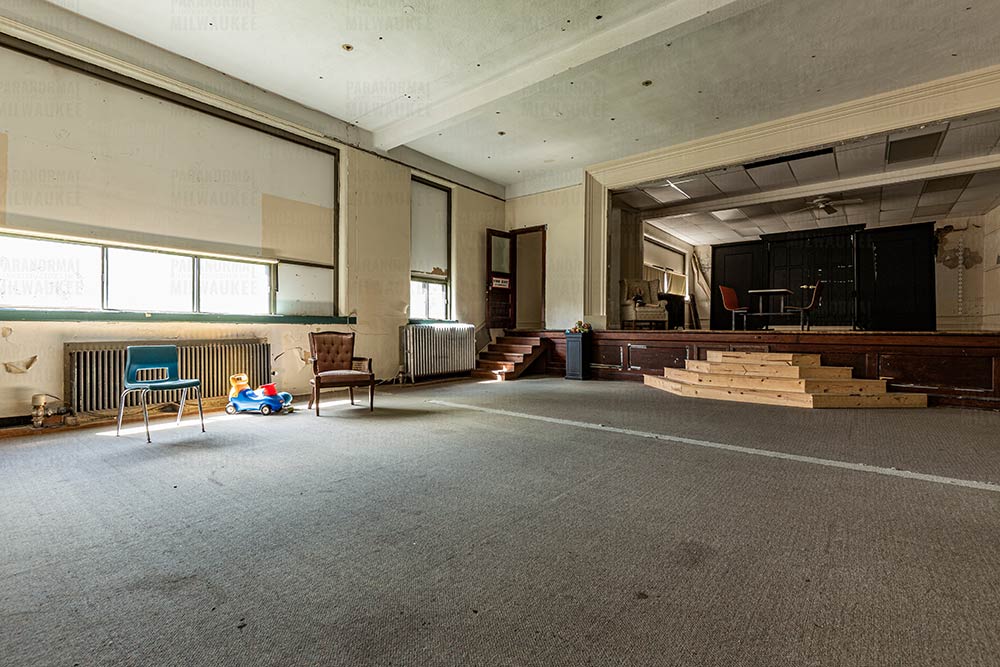 PIM started at 9:09 pm with control silence, and noted the sounds of tapping, crickets, building and stomach noises.

At 9:11 pm, Noah started an EVP session. At 9:15 pm, a shifting sound in the back of the Auditorium was noted but not picked up by the recorders and none claimed to have shifted after review.

No other activity occurred and it was decided to pause the investigation for some isolation sessions.

At 9:30 pm, the team went to the break room while Brandon went to Room 205 for an isolation session live on Facebook.

At 9:47 pm Brandon ended the session, and at 9:53 pm Gravy left for an isolation session in the Boiler Room and the Gym, also live on Facebook.

At 10:18 pm, the team left the break room for the Boiler Room. On the way, Noah heard a shuffling noise and the team checked for rodents using the FLIR thermal imaging camera but none were noted. 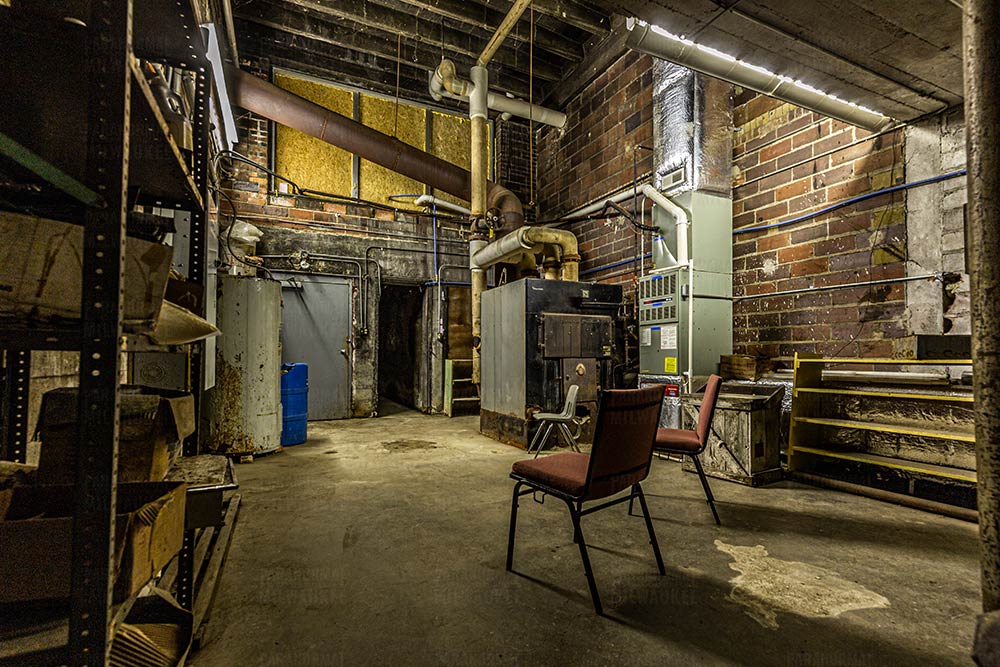 At 10:21 pm, PIM started the EVP session in the Boiler Room with control silence. After 3 minutes, Noah started an EVP session.

At 10:28 pm Noah heard a male voice twice but it was not picked up on his control recorder.

At 10:30 pm Amber head a voice saying: “No…No…” in front of her but it too was not captured on the control recorder.

At 10:33 pm, the team stayed in the Boiler Room but everyone moved spots within the room.

At 10:36 pm, both Noah and Brandon heard a voice-like sound and then Noah and Amber heard the sounds of birds.

At 10:39 pm, a PIM member asked: “Do you tell people to get out?” Both Brandon and Amber heard: “Yes.”, but it was not captured on any recorders.

No more activity occurred during this session and the team decided to continue the investigation on the 2nd Floor. 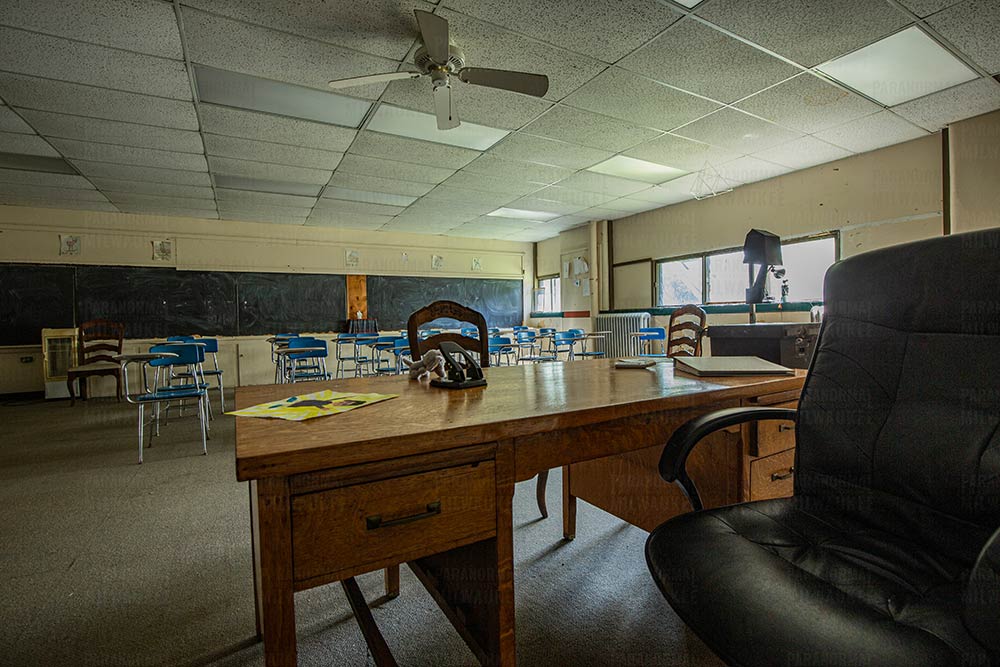 At 11:21 pm, Marilsa felt three soft touches on her upper back. No one was near her.

Nothing else of note occurred in this room and the team decided to move into the hallways.

Tom noted that shadows resembling people were generated in one stairway by a person sitting in the opposite stairway using a low power flashlight.

From 11:32 pm until 11:35 pm, PIM conducted control silence in the hallway and noted crickets and building noises. At 11:35 pm, Gravy started the EVP session.

At 11:38 pm, Amber heard three loud sounds coming from Room 207. No reason for the noises was found, but it was determined it was most likely building noises caused by contraction from the building cooling. 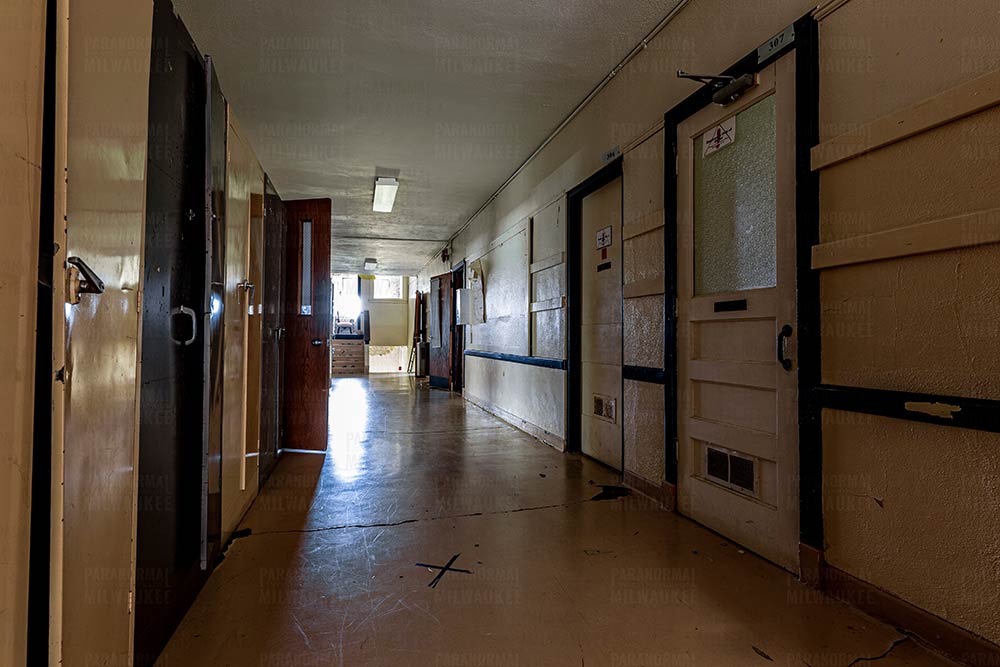 At 11:45 pm both Brandon and Marilsa heard a high-pitched sound, like singing, but the noise was not captured on their control recorders.

No other events occurred during this session and the team decided to move up to the 3rd Floor.

The team left the 2nd floor for the 3rd floor hallway. While in transit, Noah heard 3 hisses that he did not think were from an animal.

At 11:52 pm, PIM started with control silence in the 3rd Floor Hallway. Gravy heard hissing from the Boy’s Bathroom that he attributed to the building. At 11:56 pm, PIM started an EVP session.

No activity occurred during this time and the team moved into the Auditorium.

The team moved from the hallway to the Auditorium and started the EVP session immediately at 12:07 am with no control silence.

At 12:10 am, two clicks were heard coming from the Stage, similar in tone to a person shifting, but no one tagged themselves. 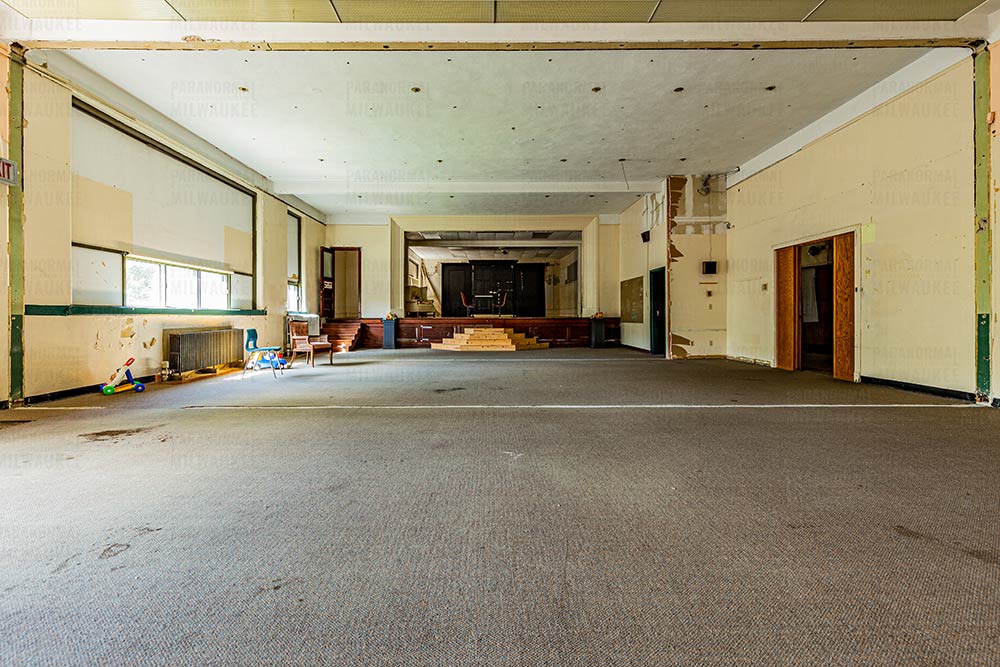 No other events occurred during this session and the team decided to take a break.

During transit from the 3rd Floor to the break room, Tom again noted many shadows were generated with the use of a low powered flashlight. The team settled in the break room for some rest until 12:55 am.

When Tom left the break room for a bathroom break in the Gym restroom, he noted that he could hear the team discussing events in the break room. The room shares a wall with the Gym and, in fact, has a window that overlooks the gym. Other members confirmed his observations.

At 1:00 am, Noah started an EVP session in the Boiler Room.

At 1:01 am, Amber heard a female voice but Noah thought that it was a coyote. 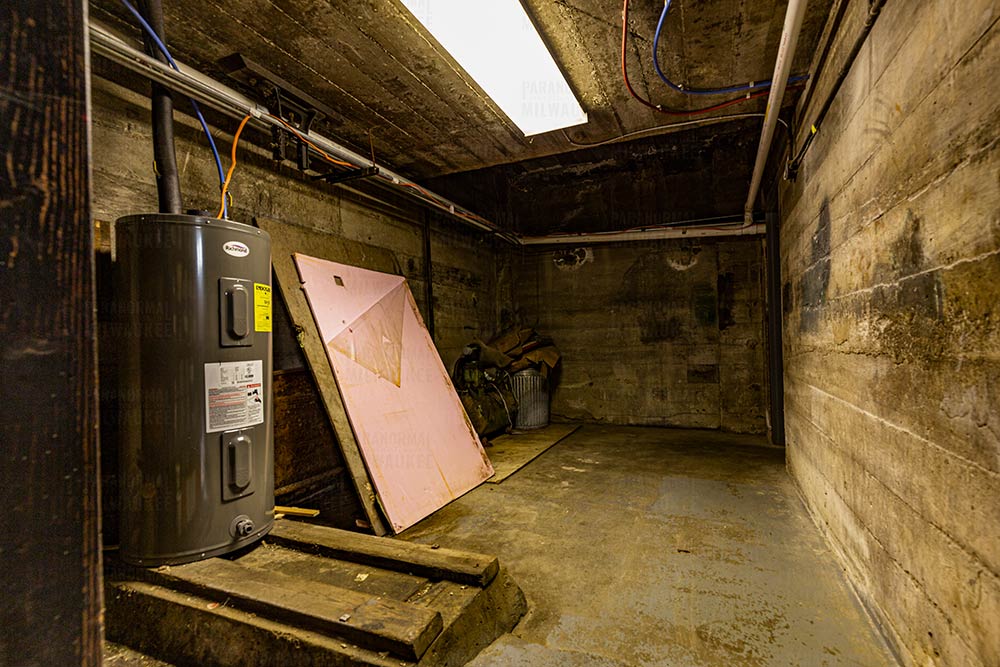 At 1:05 am, Noah heard a shifting sound: “Like cardboard sliding.” The team began searching for rodents, looking for a heat signature using a FLIR thermal imaging camera, looking for droppings, and trying to scare one to move out into the open.

At 1:10 am Noah stated: “My left ear feels like it needs to be popped.” Gravy had a similar sensation earlier in the day.

Nothing else occurred and the team decided to end the investigation in the Auditorium.

At 1:15 am, PIM started an EVP session immediately with members scattered throughout the 3rd Floor Hallway and Auditorium (no control silence).

At 1:17 am, Brandon and Marilsa heard a cat sound, while at 1:20 am Amber heard a shifting sound on Stage. 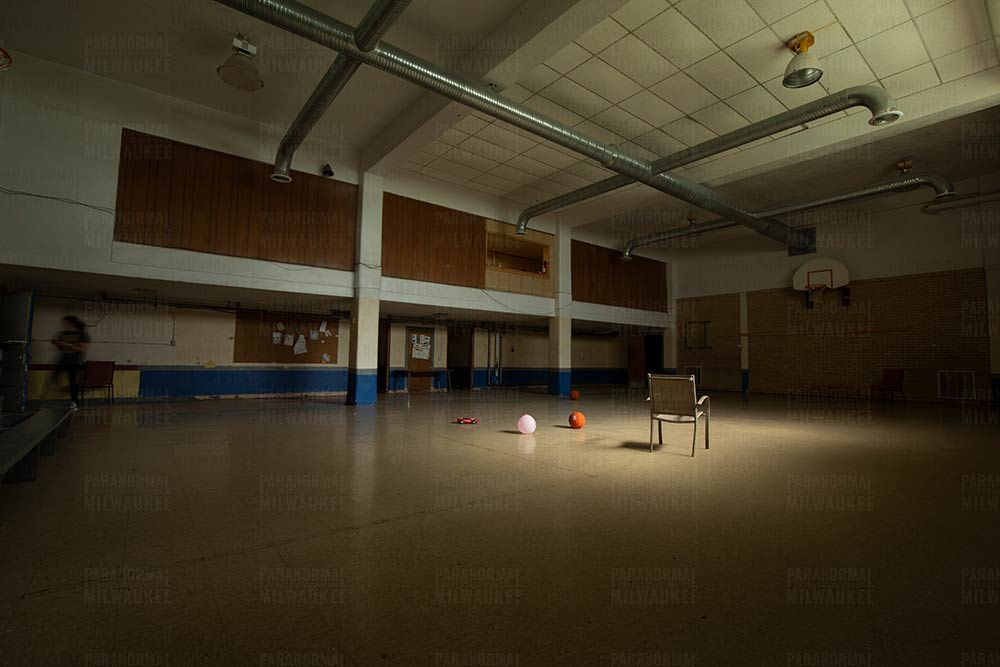 At 1:22 am Amber heard a “sound of gliding on Stage.” The sound was heard very faintly on Tom’s recorder.

At 1:26 am, Brandon heard a thump. No cause for this noise was found, but it was assumed it was a building noise.

No other events occurred and the team ended the investigation for the night.

The team turned on the lights in the building and packed up the equipment prior to retiring for the night in the break room.

The many claims at Farrar School make the site a very interesting location for paranormal investigators. Some of the claims may be related to incidental contamination from the investigation team, such as the sounds heard in the Gym or some of the shadows observed. In addition, some of the faint sounds heard may be related to natural contamination such as rodents and insects in the building. However, this does not discount other claims of activity. The team was unable to capture on their audio recorders many of the sounds they heard, and so further investigation of the site is warranted.

The investigation was a wonderful experience, augmented by the clean and well-maintained structure. PIM is very grateful to Jim and Nancy Oliver for opening their building to us, and recommend that paranormal investigators continue researching Farrar School.